Huskers back home to face Northwestern after 2 close losses 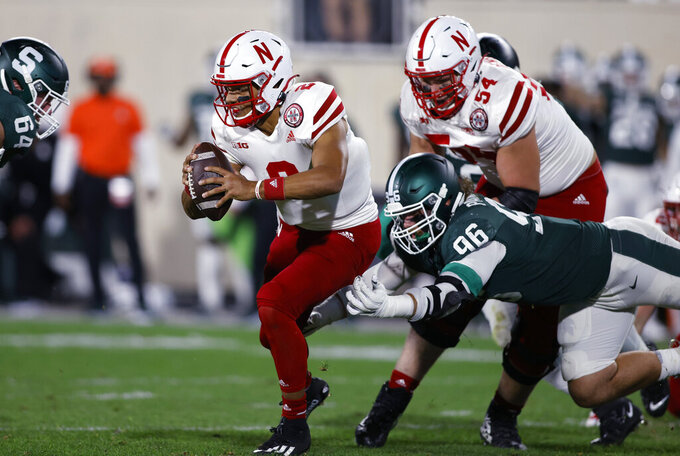 Regrets? To say the Cornhuskers have a few would be an understatement.

Nebraska's loss to Illinois in the opener is looking worse all the time, yet the Huskers (2-3, 0-2 Big Ten) pushed a top-five Oklahoma team to the brink on the road two weeks ago. Then last week, minutes from ending a 10-year drought against ranked teams on the road, a special teams gaffe and an interception turned into an overtime loss at Michigan State.

A night game at home against Northwestern (2-2, 0-1) would appear winnable. The Wildcats lost the bulk of their key contributors from the 2020 West Division champion team, and the Huskers are 10.5-point favorites, according to FanDuel Sportsbook.

But Northwestern-Nebraska games have been hard fought since the Huskers joined the Big Ten in 2011. The teams have split 10 meetings. Eight have been decided by one score, including six by three points or less.

“We've got great respect for the Cornhuskers, and I think it’s a two-way street,” Wildcats coach Pat Fitzgerald said. "And this game just seems like it’s always just down to the wire. We've had some great battles. I don’t think this one will be any different.”

Frost declared early in the week that every job up was for grabs on the offensive line. Adrian Martinez has been sacked 20 times, by Pro Football Focus’ count, and 18 times, according to the NCAA.

Tackles Turner Corcoran and Bryce Benhart have allowed a combined 50 quarterback pressures in five games, according to PFF.

“There are some guys that I know have the ability to play better than what we have been playing at a couple of positions, so competition is open and we are going to give people a real shot,” Frost said. “If we would have gotten good play there, I think we would be in a completely different spot this year. Special teams as well.”

ABOUT THOSE SPECIAL TEAMS

The Huskers are last in the Big Ten and 124th nationally in special teams efficiency, according to ESPN.

“It seems like every week there is a new problem arise,” Frost said. “You fix one and work on one and spend a lot of time on one and something you have not even anticipated comes up.”

Northwestern is 3-2 in Lincoln, with its losses coming in 2013 on the Ron Kellogg-to-Jordan Westerkamp Hail Mary and in 2019 on a field goal as time expired. Their three wins, one decided in overtime, were by a total of 12 points.

The Wildcats have a new defensive coordinator in Jim O'Neil, and his task is to devise ways to keep Martinez under control. Martinez is the Huskers' leading rusher by far, is completing 67% of his passes and has a knack for making something out of nothing when plays break down.

“"As coach O’Neil always talks about, effort erases mistakes so we’ve got to make sure we’re taking proper angles, getting to the ball and making sure that our tackling is on point," linebacker Bryce Gallagher said.

It won't be as easy against Nebraska, which held national rushing leader Kenneth Walker III of Michigan State to 61 yards on 19 carries. The Huskers held the Spartans to 14 total yards and no first downs in the second and third quarters.

“They put everybody else in the Big Ten on notice last weekend on the road with the way they played in that second half,” Fitzgerald said. “I mean, it was as dominant a performance as I’ve seen.”