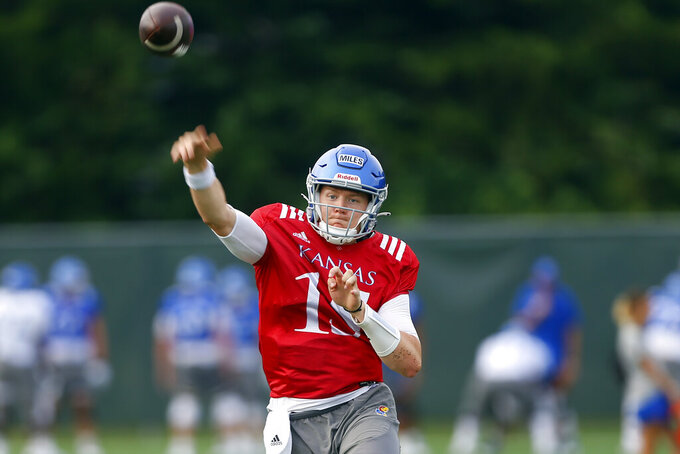 LAWRENCE, Kan. (AP) — The Missouri Valley Conference has had so much success against schools from Power Five leagues over the years that Lance Leipold flat refused to play its teams when he was the head coach at Buffalo.

He didn't have a say in who Kansas would play in his first game leading the Jayhawks.

The schedule was made long before Leipold was hired this spring to replace Les Miles, who resigned under pressure amid sexual harassment allegations dating to his time at LSU. And right there on Friday night is South Dakota, a program that beat Minnesota in 2010, Bowling Green in 2017 and took Kansas State to the wire three years ago.

“It's an excellent football conference. Very competitive,” Leipold said, “and my respect for that whole league is immense.”

The Valley has six teams ranked in the Top 25 of the Football Championship Subdivision, and four of those are among the nation's top eight teams. That includes Northern Iowa, which faces seventh-ranked Iowa State this weekend.

The Coyotes aren't among those ranked teams. And that might make them even more dangerous.

Nobody knows quite what to expect of them.

“We have a blend of some very seasoned players and a lot of younger players that are hungry to play but have practiced a lot,” said South Dakota coach Bob Nielson, whose team had half of its eight-game schedule canceled due to COVID-19 last season. “Even though they might be freshmen by classification, they're in position to contribute to this team.”

Leipold and Nielson both trace their roots to Division III football.

Leipold spent most of his career at Wisconsin-Whitewater, first as an assistant coach early in his career, then as a wildly successful head coach who went 109-6 with six national championships in eight years. He moved onto Buffalo, rebuilding the downtrodden Bulls, before he was hired by new athletic director Travis Goff to turn the same trick at Kansas.

Nielson spent a couple years at Ripon before leading Wartburg and Wisconsin-Eau Claire to three D-3 playoff appearances in eight seasons. He has a couple national titles on his resume, too, from his Division II days at Minnesota-Duluth.

In other words, the level of football doesn't mean a whole lot to Leipold or Nielsen. Perhaps that's another reason Leipold never wanted to play those pesky teams from the Missouri Valley.

MORE ON JAYHAWKS AND THE VALLEY

The Jayhawks return their leading passer (Jalon Daniels), their top rusher (Velton Gardner), their leading receiver (Kwamie lassiter II), their No. 1 tackler (Kenny Logan Jr.) and their top scorer (Jacob Borcila) from last season. But the progress made by Leipold in improving the roster is evident in the fact that none of them are sure bets to repeat the feat.

Daniels has been dueling North Texas transfer Jason Bean to start at quarterback. Velton will be pushed by Daniel Hishaw Jr. and freshmen Devin Neal and Amauri Pesek-Hickson. Buffalo transfer Trevor Wilson figures to be a top receiver.

The Jayhawks played 27 true freshmen last season, which tied for the highest number in the country. And there are 69 freshmen, redshirt freshmen or sophomores on the roster this year, which means well over half of the roster were playing high school football two years ago or less. That includes a handful who could start against the Coyotes.

ON THE FLIP SIDE

Six players also followed Leipold and Co. to Lawrence. Several are expected to play the opener against the Coyotes.