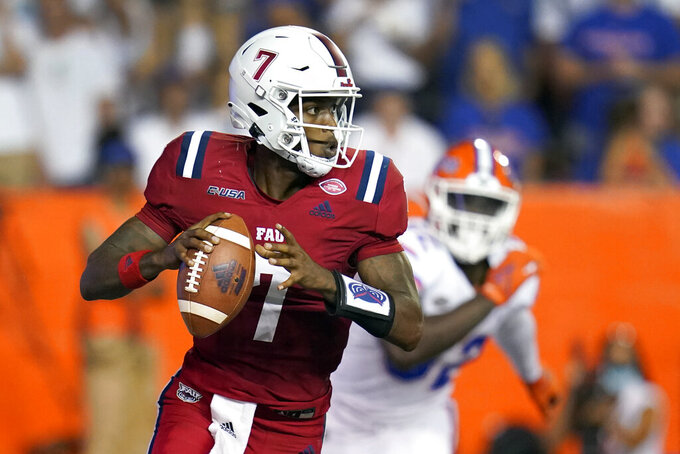 Florida Atlantic quarterback K'Nosi Perry, left, looks for a receiver as he is pressured by Florida linebacker Antwuan Powell during the first half of an NCAA college football game Saturday, Sept. 4, 2021, in Gainesville, Fla. (AP Photo/John Raoux)

GAINESVILLE, Fla. (AP) — Florida coach Dan Mullen insists he has no quarterback controversy: Emory Jones is the starter, and Anthony Richardson remains the backup following a 35-14 victory against Florida Atlantic on Saturday night in which one clearly outplayed the other.

Jones was far from sharp in the Swamp, finishing with a touchdown and two interceptions in his first career start, but the fourth-year junior had some moments to build on moving forward. He did much of his damage with his legs, finishing with 74 of the team’s 400 yards rushing.

Wearing the No. 15 that Tim Tebow made popular in Gainesville, Richardson looked more ready for the spotlight. He ran seven times for 160 yards, including a 73-yard score late in the game and an 11-yarder in which he broke three tackles and hurdled another defender. He missed his final five passes and finished 3-for-8 for 40 yards.

But Mullen made it clear that Jones has a better grasp of the entire offense right now and will keep his job. The outside noise, though, surely will be loud for the next week or two.

“He went out there and did his thing," Jones said of Richardson. "I'm happy for him.”

Malik Davis had 104 yards and a touchdown on the ground, the second time he’s hit the century mark, and the first since his freshman year in 2017. Dameon Pierce ran for two scores.

Florida’s defense, which was gouged for 30.8 points a game last season, looked like it would notch the program’s first shutout since beating Vanderbilt 56-0 in 2019. But the Gators gave up a touchdown with 4:27 remaining and another in the closing minutes of the opener for both teams.

“We’re just scratching the surface," Carter said. "I plan on having a big year, so I’m excited.”

FAU's N'Kosi Perry completed 19 of 33 passes for 261 yards and a touchdown in his first start since transferring from Miami.

All eyes, though, were on Jones, who waited three years behind Feleipe Franks and then Kyle Trask for his chance. He capped the opening drive with an option pitch to Pierce for a short score and made it 14-0 with a screen pass to sixth-year senior Rick Wells.

Jones slowed from there, underthrowing a ball in the red zone that led to his first INT and then mixing up signals and failing to convert a fourth-and-4 play. He ended up completing 17 of 27 passes for 113 yards.

“I don't feel that good about it, honestly," Jones said. “I've got to get back in the lab and play better. ... I missed too many throws that I never do.”

FAU: Willie Taggart waited nearly two years longer than expected to play his first game in the Swamp. The ex-Florida State coach was fired three weeks before the 2019 FSU-Florida game, which the Gators won 40-17. Taggart’s Owls have now lost four in row dating to last season.

Florida: The next time the Gators play at home, they won’t have it so easy. Top-ranked Alabama travels to the Swamp in two weeks for the Southeastern Conference opener for both teams. Florida played the Tide tight in December, losing 52-46 in the SEC title game in Atlanta. Alabama has won seven in a row in the series.

With several teams ahead of Florida in The Associated Press College Football Poll struggling (Iowa State) or losing (North Carolina, Wisconsin), the Gators are poised to move up.

Florida also welcomed former coaches Steve Spurrier and Urban Meyer in the first quarter. Spurrier led the Gators to their first national title in 1996. Meyer won two, in 2006 and 2008.

Florida travels to Tampa to face South Florida for the second time in school history. The Gators won in Gainesville in 2010.