Kansas faces week of change as one coach leaves, one arrives 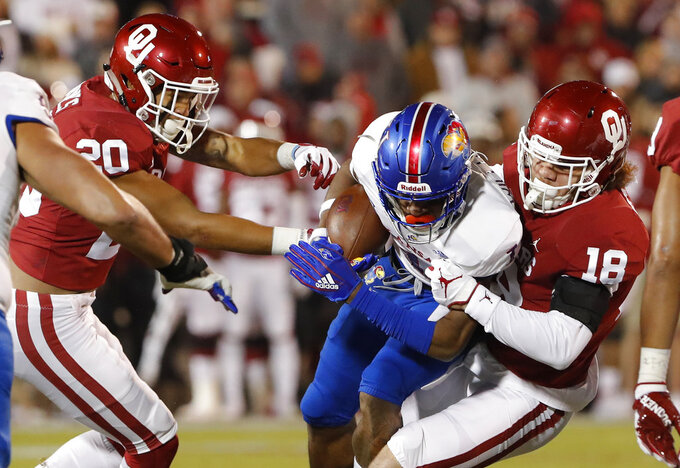 LAWRENCE, Kan. (AP) — Les Miles understood the inherent awkwardness of the situation the moment he accepted the job at Kansas, and he made every effort to keep from compounding it during his first week on campus.

Yet he also wanted to meet the young men who might soon form the foundation of his turnaround.

So limiting himself to just a few minutes, he popped into the team room at the Anderson Family Football Complex this past week. He complimented the Jayhawks on a gutsy performance in a road loss to Oklahoma, wished them luck on Friday against Texas and quietly stepped aside.

Because until that game is over, the Jayhawks still belong to David Beaty.

"They're preparing with another coach to play a very quality Texas team, so we did not want to distract," Miles explained, "but when I walked in I saw that familiar smile. The enjoyment they're having in college football. They're buddies, looking at each other like, 'Who is this guy?' Which is fine. But that was a wonderful day for me. I enjoyed it greatly."

It is rare enough that a school hires the next head coach before a season is complete, but it is exceedingly rare when that move is made with the predecessor still occupying the corner office.

But it's not as if both coaches earning paychecks from Kansas don't have their hands full.

Miles has spent much of his first week calling around to prospective assistant coaches, and he promised to interview Beaty's current staff if they have interest in remaining. He also took a deeper look at the current roster and no doubt began to formulate a plan for recruiting.

The early signing window in December is fast approaching, a big reason athletic director Jeff Long moved so quickly with the hiring. Kansas has exactly one known commitment.

"The reception we've had as we polled some of the key candidates has been very strong," Miles said. "Get on the phone and touch base, qualified coordinators first, shrink the list, go see them and have them see us. As soon as you finish with the coordinators, you take up the assistant coaches very quickly, because those guys that know the coordinators and recruiting areas."

All the while, Beaty will be trying to prepare the Jayhawks to beat Texas. Again.

It was just two years ago that he had arguably the biggest highlight of his four seasons with the Jayhawks, when Kansas upset the Longhorns at Memorial Stadium. It seemed at the time as if it might boost his rebuilding job to the next level, though it never quite worked out that way.

Beaty still has just six wins heading into his final game on the sideline.

"I haven't spoken with him and we probably won't speak, but that's OK," Beaty said. "I'm going to be the coach here through the rest of the week and then it's going to be time for a change."

So what about the players, all those kids that were recruiting and sweated and bled for Beaty over the past few years, and now look ahead with equal parts trepidation and excitement?

Yes, they said, there is a bit of awkwardness this week. But not as much as you might think.

"I'm excited for him and this program here. It's promising," said Jayhawks defensive tackle Daniel Wise, who will be playing his final game Saturday. "We know Les Miles, we know what he can do with the guy like Pooka (Williams), obviously. We know he loves Pooka already, he's a Louisianimal. I'm just happy for him and the future, the direction they're headed."

Williams is certainly familiar with Miles having grown up in Louisiana, and so is Corione Harris, a four-star cornerback who Beaty managed to pluck from the bayou this past recruiting cycle.

The pair of freshmen could be important building blocks for Miles going forward.

What did Harris tell him about Miles?

"Not really much," Lee said. "All he told me was he eats grass. And I was just like, wow."

He also wins games. He did it at Oklahoma State, turning around that Big 12 also-ran over four seasons in Stillwater, and he did it with the Tigers, winning a national championship.

More than Miles' diet, that pedigree is what has Kansas players optimistic about the future.

By Greg Beacham an hour ago
By The Associated Press 6 hrs ago
14 hrs ago
16 hrs ago
By Ralph D. Russo 16 hrs ago