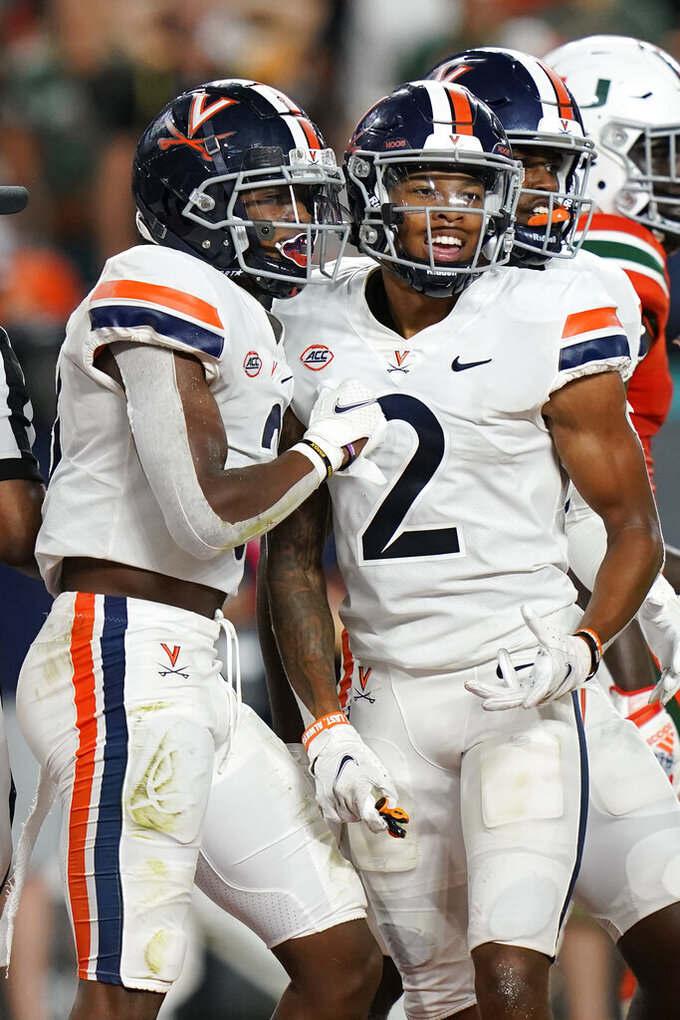 LOUISVILLE, Ky. (AP) — While Louisville’s offensive numbers suggest it can hang with Virginia, the Cardinals' defense is another story.

The Cardinals’ gaudy stats on offense weren’t enough to beat Wake Forest, so they’re striving for defensive improvement to slow down the Cavaliers.

Saturday’s meeting features two of the league’s top five offenses and dynamic quarterbacks in Louisville’s Malik Cunningham and Virginia’s Brennan Armstrong. That adds juice to a close series the Cardinals (3-2, 1-1 Atlantic Coast Conference) lead 5-4 and hope to maintain against the Cavaliers (3-2, 1-2).

“The challenges I see from Virginia are just the formations that they have,” linebacker C.J. Avery said. “A lot of motioning, pre-snap movement, post-snap movement. It’s just more eye candy, and making your eyes are in the right spot.”

They now enter the interdivisional matchup having to slow Armstrong, whose 1,973 yards passing mark Virginia’s best five-game start ever. The Cavs are No. 2 in passing (398 yards per game) and seventh in offense (526.2).

Armstrong passed for 203 yards and a touchdown and rushed for two scores in last year's meeting.

“He does a really good job of finding open receivers,” Louisville defensive coordinator Bryan Brown said of Armstrong. “Puts the ball on the money. I mean, he does everything you want a quarterback to do.”

The Cavs are coming off a nine-day break since escaping 30-28 at Miami. Virginia never trailed but almost faced overtime until Andy Borregales’ 33-yard field goal attempt bounced off the left upright as time expired.

Earning consecutive road wins for the first time since 2017 requires mounting similar resistance against Cunningham (1,606 combined yards, 17 TDs), who remains a threat with his arm and feet.

“He’s a run threat, he creates on his own, which means there’s a great chance he’ll still have the ball after you tackle in the open field after you’ve covered downfield,” Virginia coach Bronco Mendenhall said.

“It affects everyone which just means the plays extend. You play defense longer when a quarterback is as athletic as Louisville’s quarterback.”

Some other things to watch as Louisville hosts Virginia:

Cunningham continues to spread the ball around. The junior QB targeted 11 receivers at Wake with eight catching at least one pass. His longest completion went to sophomore Tyler Harrell, who showed his speed by blowing past four defenders for a game-tying 75-yard TD in the fourth quarter.

“We go out there and just want to get better each and every day,” tight end Marshon Ford said of the process of developing playmakers. “They’re up for that challenge and it’s been going well.”

Cavaliers cornerback Anthony Johnson has found his niche in Charlottesville since transferring from Louisville. Johnson has started every game and is tied for fifth on the team with 19 tackles. He also has one of Virginia’s two interceptions.

Cunningham rushed for two short TDs at Wake Forest, but others shouldered the load as Louisville totaled a season-high 213 yards. Jalen Mitchell had 89 yards on 17 carries and leads the team with 331 on 77 attempts for a 22-yard edge on the QB. The Cardinals rank eighth in the ACC at 168.6 per game.

Virginia has registered 10 sacks, including a season-high four at Miami. Senior end Mandy Alonso had two against the Hurricanes with three tackles for loss including a safety, earning ACC weekly defensive lineman honors.

Louisville is 4-0 at home against Virginia and earned its only win in Charlottesville in 2016 (32-25) behind eventual Heisman Trophy winner Lamar Jackson.