LSU-McNeese becomes the 'O Bowl,' Tigers aim to bounce back 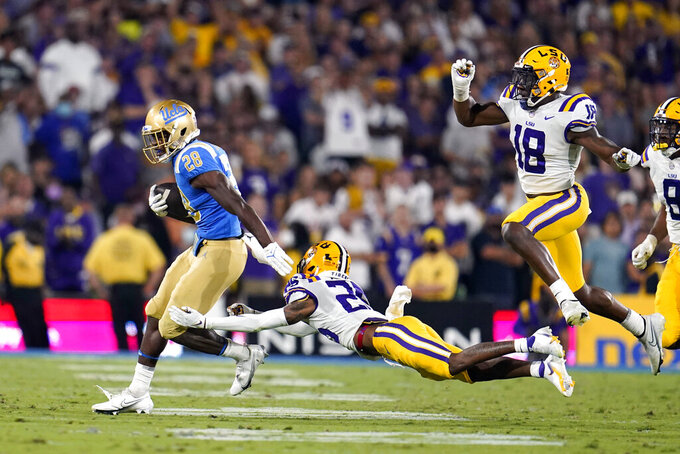 A visit to LSU's Death Valley by an FCS-level team normally inspires little more fanfare than a typical early season tune-up for the Tigers.

This Saturday's meeting between LSU (0-1) and McNeese State (0-1) brings considerably more intrigue, however.

The reasons include the relationships that currently bind the two programs — and the fact that LSU coach Ed Orgeron's job security could become more tenuous if the Tigers don't rebound impressively from a season-opening 38-27 loss at UCLA.

“We got to play our best to get this taste out of our mouth and start feeling good,” Orgeron said this week.

If the Tigers do play well, it'll come at the expense of Orgeron's son, Cody, who is McNeese's quarterback, and Cowboys coach Frank Wilson, a former LSU assistant who helped recruit past Tigers stars including Jarvis Landry, Leonard Fournette and Tyrann Mathieu.

Orgeron calls Wilson “one of the greatest assistant coaches who ever came to LSU.”

Wilson, who's team also lost its opener, said LSU remains “near and dear to my heart,” and a place where he made “memories that will last for a lifetime.”

Wilson still stops by LSU practices, as does Cody Orgeron, who's made friends with a number of Tigers.

“Cody comes around here all the time," Ed Orgeron said. “Our players love him.”

But the Tigers don't like the prospect of having this season resemble 2020, when they went 5-5 for the program's first non-winning season since 1999, resulting in the replacement of both their offensive and defensive coordinators.

“This year is not going to be another last year; that’s not going to happen," LSU edge pass rusher Andre Anthony said. "We need to stay together as a team, for one. We can win out, ball out and learn from our mistakes.”

If so, it'll start with getting a victory for “Coach O,” and making sure his quarterback son doesn't lead the Cowboys to an unlikely triumph in the “O Bowl.”

Orgeron declined to say if the reasons were injury-related or disciplinary, but Deculus and Gaye both were treated for apparent injuries last week.

Like his father, Cody Orgeron grew up an LSU fan and said playing in Tiger Stadium fulfills a childhood dream. The younger Orgeron, now in his sixth and likely final season at McNeese, enters Death Valley having repeatedly thrown for more than 300 yards in a game — albeit against FCS or lower-division teams.

The younger Orgeron passed for 367 yards and two TDs in a 42-36 loss to Division II West Florida last weekend.

Junior Tyrion Davis-Price and sophomore Josh Williams got all the carries while John Emery Jr. was held out for academic issues that could also cause him to miss this week's game. Ed Orgeron said he'll try to get freshman Corey Kiner more snaps this week.

He also wants a less predictable mix of inside and outside runs called.

It was a difficult debut for defensive coordinator Daronte Jones, a former NFL secondary coach.