Michigan has difference-making QB for change against Ohio St 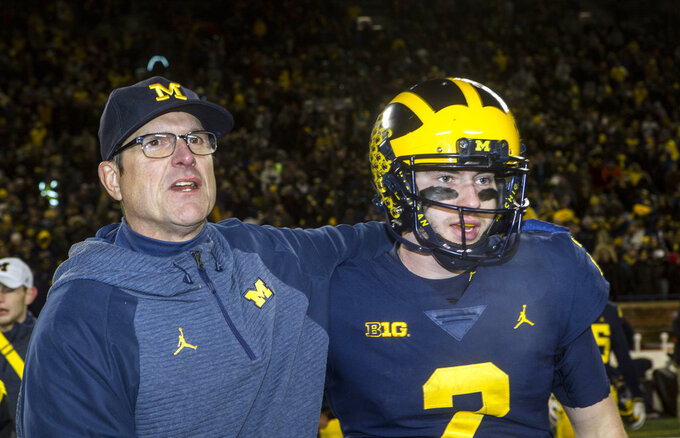 FILE - In this Nov. 17, 2018, file photo, Michigan head coach Jim Harbaugh, left, puts an arm around Michigan quarterback Shea Patterson after defeating Indiana 31-20 in an NCAA college football game, in Ann Arbor, Mich. No. 4 Michigan is in a position to win a Big Ten title for the first time since 2004 in part because the NCAA allowed Ole Miss transfer Shea Patterson to play this season for Jim Harbaugh. (AP Photo/Tony Ding, File)

ANN ARBOR, Mich. (AP) — Shea Patterson's parents took him out for a sushi dinner and to see the movie "Overlord," hoping to get Michigan's quarterback away from his relentless preparation for the biggest game of his life.

"We didn't talk about football," Sean Patterson said in a telephone interview Wednesday. "It was just nice to see him sitting with his mom and eating popcorn. We wanted to give him a break from studying film."

No. 10 Ohio State has been watching some film, too, watching what Patterson has done with the fourth-ranked Wolverines this season. The Buckeyes see a dual-threat quarterback who looks nothing like the players Jim Harbaugh had under center the previous three years — all Ohio State wins.

"In past years, they haven't had a running quarterback like him," Buckeyes defensive tackle Dre'Mont Jones said. "He creates his own new dynamic we have to worry about."

The Wolverines are favored to win Saturday in the Horseshoe — where they haven't won since 2000 — at least in part because of an offseason victory that made Patterson eligible to play right away. He decided to transfer from Ole Miss nearly a year ago to Michigan, but he had to wait until April to find out the NCAA was granting his request to play this season instead of sitting out a year.

"It was a scary and anxious time," Sean Patterson recalled. "I think going through what he did made him a tougher and stronger person and it makes him appreciate every moment with the winged helmet even more."

With the help of attorney Tom Mars, the appeal was won for Patterson — and the Wolverines.

"The best part of the experience for me was getting to know Shea and his family," Mars wrote in a text message. "And, then watching what Shea's accomplished with his teammates this season — game after game. I haven't missed any of them, and I'll be in the stands in Columbus on Saturday."

Patterson, a former five-star recruit from Toledo, Ohio, decided to transfer from Ole Miss after the NCAA penalized the football program with sanctions for rules violations under former coach Hugh Freeze. The penalties included a bowl ban for the 2018 season. Patterson and other players argued they were misled during their recruitment by Ole Miss coaches and staffers about the nature of the NCAA's investigation.

Patterson insisted he doesn't think much about the appeal process these days, but acknowledged being thankful to win it.

"Just was so fortunate to get this opportunity to play for the team," he said.

Harbaugh was fortunate, too. In his fourth year in charge of college football's winningest team, he desperately needed a difference-making quarterback for a change.

Patterson has delivered. He is one of five finalists for the Johnny Unitas Golden Arm Award and may be mentioned as a Heisman Trophy candidate if he can help Michigan beat Ohio State for just the second time in 15 years.

Patterson has completed 66 percent of his passes for 2,177 yards with 18 touchdowns and just four interceptions. He can throw from the pocket or on the move, running the play called or one he improvises.

"I can't say we rehearsed some of the things that come about in a game, especially the times when you see him scramble and make that throw across the body and across the field," said Pep Hamilton, Michigan's assistant head coach. "I pretty much cringe every time that happens, but he seems to come out on the right side of it."

Patterson has run for 255 yards and two scores, keeping the ball after faking handoffs in read-option plays that have become increasingly more effective.

"You need him to make a play, he makes it," Harbaugh said. "Whether it's throwing or running or not turning a bad play into a worse play. He's got a great feel, talent and energy for the game. Love his focus. Love his intensity."

Harbaugh has said Patterson will be an NFL quarterback. A report suggested Patterson is expected to enter the NFL draft after the season instead of staying in school for his senior season and then being part of a stronger class of NFL hopefuls.

"That's completely false," Sean Patterson told The Associated Press. "We have not spoken about him entering the draft at all. And when Shea does make the decision that is best for him, it won't have anything to do with the competition because he's never been afraid of that. The only thing he's focused on competing for right now is a Big Ten championship."

And if Patterson's parents didn't pull their son away from Schembechler Hall on Tuesday night for a few hours, there is a good chance he would've been watching more film.

"He's a guy who is a film junkie," Hamilton said. "He loves watching film."