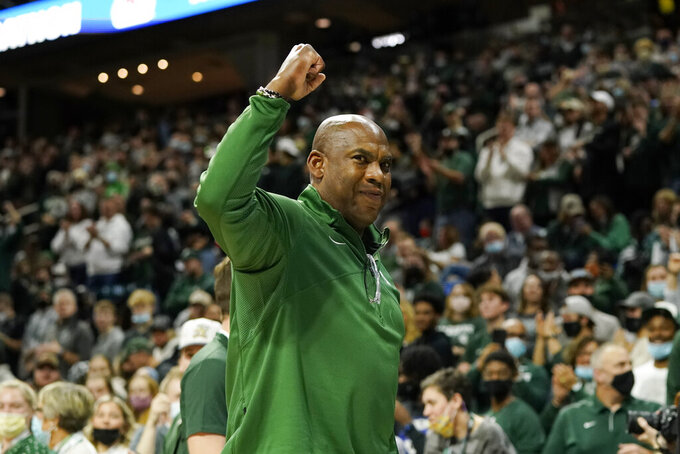 FILE - Michigan State head football coach Mel Tucker acknowledges the fans during the first half of an NCAA college basketball game between Michigan State and Penn State, Saturday, Dec. 11, 2021, in East Lansing, Mich. Michigan State's third-year football coach, hoping more people will get to know him better, gave five reporters an all-access day this summer that started on a golf course and ended on the sprawling deck at his house. (AP Photo/Carlos Osorio, File)

EAST LANSING, Mich. (AP) — Mel Tucker smokes cigars and poses with expensive cars on social media, hoping to grab the attention of recruits from coast to coast and perhaps pique interest of fans near and far.

The third-year football coach for No. 15 Michigan State, hoping more people would get to know him better, invited five reporters to spend a day with him on a golf course, at a restaurant, in the team's football facility and into his home.

While a Group of Five football coach may provide similar access, it's rare that the leader of a Power Five program would give media members about 12 hours of his time in pursuit of publicity.

Tucker always seems to be on brand, going outside the ordinary box most college football coaches stay confined to, in a calculated quest to promote himself and the program as he chases a championship.

“We recruit nationally so anything we can do on social media to sell our program, we’re going to do it,” he said simply.

The Spartans were one of college football’s biggest surprises last year, winning 11 games, including a New Year’s Six bowl game. It was quite a turnaround after going 2-5 in the pandemic-shortened year that stunted Tucker’s debut season as Mark Dantonio’s successor.

Making a proactive move to keep a coach who potentially could have left for LSU or the NFL, donors decided to give him a raise as part of a $95 million, 10-year contract to stay.

What Michigan State did on the field last year, though, was not good enough for Tucker. He is relentlessly working toward winning a national championship, which only the school's 1952 team achieved as recognized by the AP.

To win it all at Michigan State, Tucker knows he has to do more.

Instead of relegating himself to the media relations help that Michigan State's athletic department provides, earlier this year Tucker hired a public relations and marketing firm that has clients such as Amazon to assist him with branding.

“He was so different than any entrepreneur I've ever been around that I said, `We need to work together,'" said Shelley Reinstein, whose company, Autumn Communications, assisted with Tucker's charity work and media opportunities this offseason. “I'm blown away by how smart and eager to learn he is."

A certified cigar sommelier is, too.

Tables were set up on the upper level of Tucker's sprawling deck to display an array of cigars and bourbons while he hosted a small group of reporters to wrap up a long day.

While Tucker occasionally enjoys a cigar, sometimes in a room downstairs that is ventilated and decorated with a painting of him and Sparty, the school's mascot, he is not an aficionado.

“He wanted to know all kinds of things like how long it takes a seed to grow," Rodriguez recalled Wednesday. “You would think guys at that stage in life wouldn't have time for a little guy like me, but he listened to every word and gave me respect.

“After the reporters left, he invited me and the two people I was with to stay for a cigar and a pour. We would've loved to because he's so down to earth, but we were on the clock."

Tucker always seems to be working.

While he was spending time with reporters, his wife, a travel advisor, and their two sons were on a trip in Mexico. When his football players had a day off earlier this month, Tucker joined basketball coach Tom Izzo to be the grand marshals of a NASCAR race in southern Michigan.

Much of what Tucker does is designed to attract talent, from high schools or via the transfer portal, but he clearly cares about his current players as well.

Michigan State linebacker Darius Snow said Tucker has helped him pursue his dreams on and off the field.

“I like to call him a contemporary because he embraces social media and NIL and that clicks with young men our age,” Snow said in a telephone interview. “He knows I’m a graphic designer, so he has created opportunities for me to have my work put out there on the team’s social media accounts. I'm not sure there would be many, if any, other coaches that would do that."