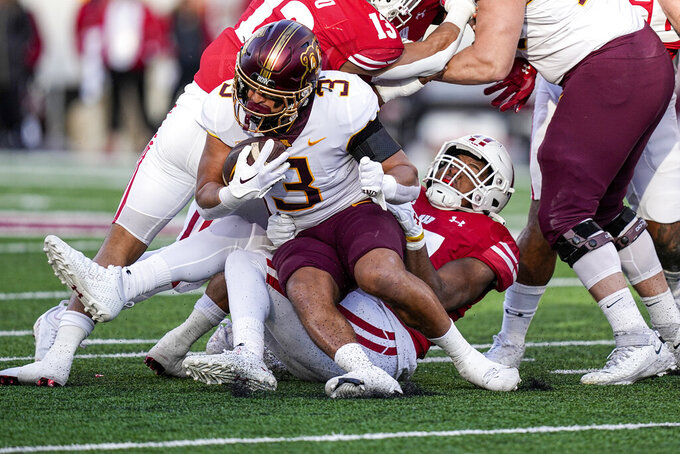 MADISON, Wis. (AP) — Minnesota coach P.J. Fleck understood one of his major assignments upon taking this job was to alter the balance of power in the Gophers’ rivalry with Wisconsin.

Athan Kaliakmanis connected with Le’Meke Brockington on a tiebreaking 45-yard touchdown with 3:40 remaining and Minnesota barely hung on in the final minute to beat Wisconsin 23-16 on Saturday. The victory enabled Minnesota to beat the Badgers in consecutive seasons for the first time since 1993-94.

After losing to Wisconsin 14 straight times from 2004-17, the Gophers have won three of the last five matchups.

“I know that’s what I was hired to do," said Fleck, who improved his record in this rivalry to 3-3.

Minnesota (8-4, 5-4 Big Ten) retained possession of Paul Bunyan’s Axe, which goes to the winner of this annual matchup. The Gophers also tied the most-played Football Bowl Subdivision rivalry — these two Big Ten foes have been facing each other since 1890 — at 62-62-8.

The Gophers first had to sweat out Wisconsin's improbable comeback attempt in the final minute.

After an injury knocked Wisconsin quarterback Graham Mertz out of the game on the Badgers’ final series, backup Chase Wolf drove the Badgers into position for a tying touchdown. A pass interference penalty in the end zone gave Wisconsin first-and-goal from the 5 with 26 seconds left.

Wisconsin (6-6, 4-5) fell to 4-3 under Leonhard, who was promoted from defensive coordinator after the firing of Paul Chryst. Leonhard now waits for an announcement on whether he has the job for keeps.

“We’ve been through a lot of adversity and we’ve learned a lot about this team,” Leonhard said. “There are certain things I don’t like. We need to improve. We need to win games, flat-out. That’s our job. That’s our goal here, to be competitive in the Big Ten and win football games. We’ve gotten inconsistent results.”

Minnesota was facing second-and-11 when Brockington ran a slant route, caught Kaliakmanis’ pass in stride inside the 35 and outran Wisconsin’s defense to the end zone for his first career touchdown.

Kaliakmanis ended up 19 of 29 for 319 yards with two touchdowns and no interceptions in his third game filling in for Tanner Morgan, who is out with an upper-body injury. That represented a major step forward for Kaliakmanis, who was 7 of 15 for 87 yards with an interception last week in a 13-10 loss to Iowa.

“I knew that I couldn't play like I did (against) Iowa,” Kaliakmanis said. “I had to respond and play a lot better.”

Wisconsin, which had come back from a 13-6 deficit to take a 16-13 lead late in the third quarter, couldn’t rally a second time.

This game shaped up as a duel between two of the nation’s top running backs in Minnesota’ Mohamed Ibrahim and Wisconsin’s Braelon Allen, but it didn’t quite work out that way.

Allen missed Saturday’s game after injuring his ankle a week earlier in a 15-14 victory at Nebraska.

Ibrahim took a big hit in pass protection on Minnesota’s opening series and finished with 27 carries for 70 yards, the first time this season he’s been held below 100 yards.

“If you'd told me that before the game, I would have said we were going to win," Wisconsin safety John Torchio said. “That's tough. Credit to them. They went out and made plays.”

Minnesota: The Gophers did a nice job of bouncing back from the loss to Iowa and withstood the absence of safety Tyler Nubin, who was out with a hand injury. Minnesota showed it has a bright future as the passer and receiver on the winning touchdown are both redshirt freshmen.

Wisconsin: This program prides itself on offensive line, but the repeated penalties by Wisconsin's offensive linemen kept the Badgers from tying the score on the game's final series. After Chimere Dike's 9-yard reverse put Wisconsin ahead 16-13 in the third quarter, the Badgers went three-and-out three times and threw an interception in their next four series. Mertz was 16 of 27 for 170 yards with an interception.

Both teams should learn their bowl destinations and opponents on Dec. 3.