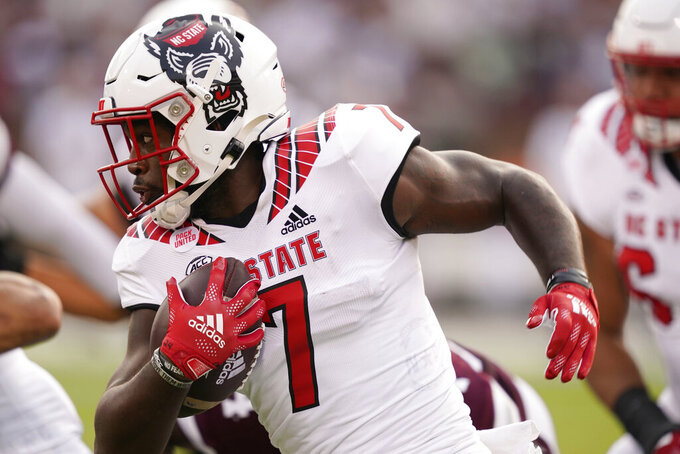 North Carolina State looked sharp in its opener only to fall flat in its marquee nonconference road game that included a pair of key season-ending injuries.

And with the six-time Atlantic Coast Conference champions looming on the schedule, Dave Doeren needs his Wolfpack to regroup quickly in Saturday’s home game with Furman.

“They’re the players that need to play better, I’m the coach that needs to coach better, I own that,” Doeren said. “And I look at it as a great opportunity to make our team better. There’s a lot of football left for us to be excited about, and it starts this week.”

N.C. State (1-1) opened with a 45-0 win against South Florida, an all-around sharp performance that had Doeren praising his team’s maturity. That raised expectations for last weekend’s trip to Mississippi State from the Southeastern Conference.

But the Wolfpack gave up a game-opening kickoff for a touchdown and trailed the entire way in a 24-10 loss that included losing all-ACC linebacker Payton Wilson and safety Cyrus Fagan to season-ending injuries.

Now comes the matchup with the Paladins, ranked No. 25 in this week’s Championship Subdivision coaches poll, followed by a visit from No. 6 Clemson.

“I think through a loss, you can get a lot of really, really valuable lessons – and maybe we needed that,” Doeren said. “Maybe we needed to get punched in the mouth, we read our press clippings too much after the opener, I don’t know.”

Furman is 2-0 for the first time since 2014 after a 26-0 win against Tennessee Tech, the program’s first shutout since 2004. The Paladins have allowed an average of 230 yards to rank ninth in the FCS ranks.

“I think we’ve only played a little over 50 snaps a game, which I know (the defensive players) appreciate that too,” Furman coach Clay Hendrix said. “I hope we can keep that because … we hardly had anybody play more than about 25 snaps in the game. That’s a pretty good recipe when you’ve got some good players, you build depth, keep guys fresh. That’ll certainly help us as the year goes on.”

Some other things to know about Saturday’s Furman-N.C. State game:

Furman has lost its last five games against Bowl Subdivision opponents, including to N.C. State in 2017. The Paladins’ last win against an FBS opponent came against UCF in 2015.

N.C. State has a huge hole in the middle of its defense with Wilson’s injury. He was a first-team all-ACC pick by The Associated Press last season with a league-leading 108 tackles despite missing a game.

Sophomore Jaylon Scott is set to start and help the Wolfpack try to replace Wilson.

“He just told me literally that I’ve prepared for this, you know what to do, just go ball out, pretty much,” Scott said of Wilson.

N.C. State needs to get its ground game going again. Both Zonovan Knight and Ricky Person Jr. had 100-yard rushing games in the opener against USF, but they combined for 50 yards on 16 carries in the Mississippi State loss.

The Paladins have been able to move the ball through the air and on the ground through their first two games.

Quarterback Hamp Sisson is a two-time captain who threw for a career-high 362 yards with three touchdowns in the opener against North Carolina A&T. Tailback Devin Wynn has run for 167 yards and two touchdowns through the first two games.

Furman ranks No. 19 in the FCS ranks in total offense at 429 yards per game.

N.C. State’s players got a reminder of what can happen when don’t execute well with special teams. In addition to surrendering the 100-yard kickoff return to open the game, N.C. State also had the reliable Christopher Dunn miss a 48-yard field goal in the first quarter and had no kick or punt return yards.

“We lost the special-teams field battle badly and we did a lot of things not to our standard,” receiver and punt returner Thayer Thomas said.