No. 1 Georgia, No. 11 Kentucky in matchup of SEC unbeatens 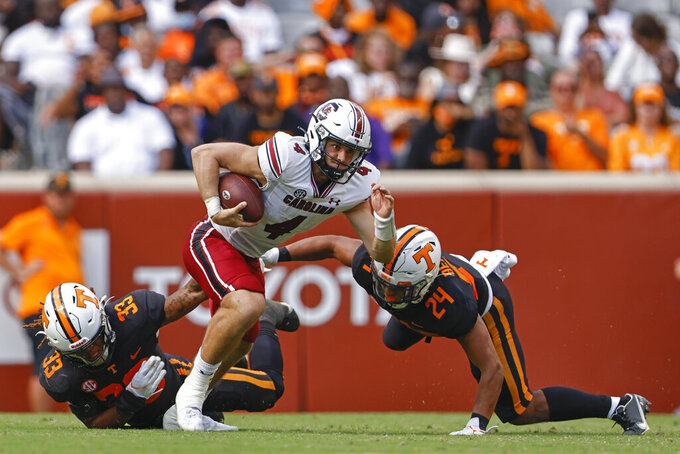 No. 11 Kentucky (6-0, 4-0 SEC) visits No. 1 Georgia (6-0, 4-0) in the matchup of the league's last two undefeated teams. The Bulldogs were expected to be this strong halfway through the season. But the Wildcats? Not so much. Kentucky is off to its first 6-0 start since 1950 and is 4-0 in the league for the first time since 1977. The Wildcats are doing it on the ground with Chris Rodriguez Jr., who leads the SEC with 128 yards rushing a game. It'll be a big challenge for Kentucky to get the ground game going as Georgia is fourth in the country — and tops in the SEC — at allowing fewer than 65 yards rushing per game this season. Kentucky is 3-14 all-time against opponents ranked No. 1, the last time toppling LSU in triple OT in 2007,. Still, if Kentucky can pull off the upset Between The Hedges, it will be the second straight week a No. 1 team from the SEC has fallen after Texas A&M's takedown of top-ranked Alabama on Oct. 9.

No. 13 Mississippi's offense against Tennessee's offense at Knoxville, Tennessee. If you like lots of points, this is your must-see SEC. The Rebels are fourth nationally averaging more than 46 points per game, while the Vols and first-year coach Josh Heupel are close behind at better than 41 points per contest. Tennessee has scored 28 points in the first quarter its last two games, against Missouri and South Carolina, for the first time in modern program history. Ole Miss and coach Lane Kiffin are using a balanced offense as the only team in the country to average 300 or more yards passing and 250 or more yards rushing. It's the first time these teams have played since 2014. As a sidelight, it'll mark Kiffin's return to Neyland Stadium as a head coach since he left his position as Vols coach after the 2009 season.

Even with South Carolina carrying a nine-game SEC losing streak, it probably won't be the week Vanderbilt finally breaks through for its first league victory in nearly two years. The Commodores have lost their past 15 SEC games, including their two this season by a combined score of 104-0 to Georgia and Florida. The Gamecocks have a 12-game win streak in the series with Vanderbilt, dating to when first-year coach Shane Beamer was a South Carolina assistant for Steve Spurrier.

Through six weeks, the SEC has overturned 69 of 122 plays that were reviewed (56.5%), which if it holds, would be a record mark in the league. Only once, in 2018, did the SEC overturn more than half of the plays it reviewed. ... No. 20 Florida is the only SEC school, and among just eight in the FBS, with more than 3,000 yards of offense this season. The Gators have 3,024 yards. ... Mississippi State quarterback Will Rogers has 14 TD passes through five games, the most for a Bulldog passer in the last 15 years. ... No. 21 Texas A&M joined Alabama (6) and Auburn (3) as the only SEC programs with three or more victories over a No. 1 ranked team. ... Alabama has recorded 84 non-offensive touchdowns — the most in college football — in coach Nick Saban's 15 seasons, adding a score on a blocked punt in the loss to the Aggies last week.

No. 20 Florida defensive tackle Zachary Carter is causing havoc for SEC opponents. He leads the league with 5 1/2 sacks and is second with eight tackles behind the line of scrimmage. The redshirt senior, at 6-foot-4 and 285 pounds, led the Gators in both categories in 2020. Carter had three tackles and two quarterback hurries in Florida's 31-29 loss to Alabama on Sept. 18.