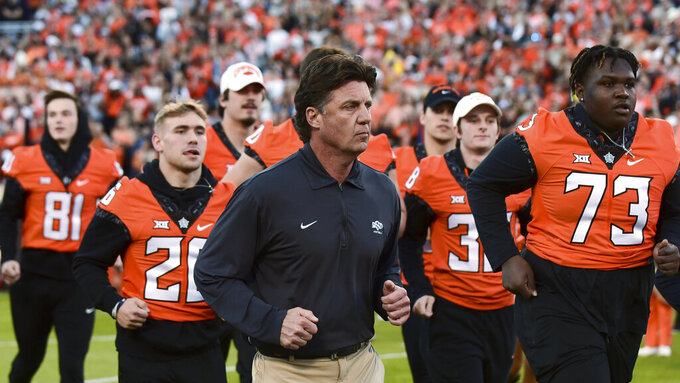 Line: Oklahoma State by 12 1/2, according to FanDuel Sportsbook.

Oklahoma State looks to strengthen its chances at a spot in the Big 12 title game and improve its position in the College Football Playoff rankings. The Cowboys also look to show how their highly-ranked defense holds up against a high-caliber offense. TCU looks to build momentum after knocking off then-No. 14 Baylor last week in its first game since parting ways with longtime coach Gary Patterson.

Oklahoma State RB Jaylen Warren vs. TCU defensive front. Warren has rushed for 928 yards and seven touchdowns this season and has proven to be a capable workhorse back. He ranks 15th nationally with 103.1 yards rushing per game. TCU is one of the nation's worst teams against the run, surrendering 201.6 yards per game.

TCU: QB Chandler Morris. He passed for 461 yards and two touchdowns and ran for 70 yards and another score in his first start to help the Horned Frogs beat Baylor last week. The former Oklahoma backup is expected to play a significant role with starter Max Duggan still nursing a broken bone in his foot.

Oklahoma State: LB Malcolm Rodriguez. He is a Butkus Award semifinalist who leads the Big 12 in tackles per game (9.7) and has 8.5 tackles for loss.

TCU interim head coach Jerry Kill was the linebackers coach at Midwest City (Oklahoma) High School in 1984 when Oklahoma State coach Mike Gundy was the quarterback. Kill was Gundy’s biology teacher. ... Oklahoma State's Tay Martin has at least one touchdown reception in each of his past three games. ... Former Oklahoma State running back Barry Sanders will be honored Saturday with a statue outside of the stadium, and his name and number will be added to the Ring of Honor inside the stadium. ... TCU's Quentin Johnston has gained at least 100 yards receiving in three of the last four games.