No. 15 A&M tries to rebound after 1st loss against Bulldogs 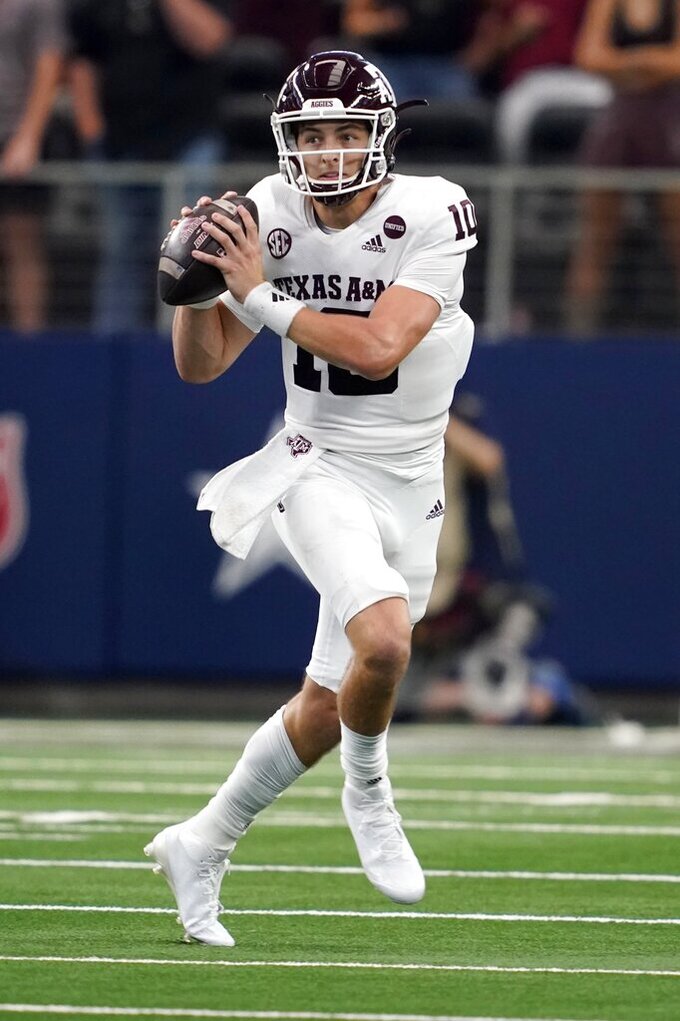 Texas A&M quarterback Zach Calzada scrambles out of the pocket before throwing a pass in the first half of an NCAA college football game against Arkansas in Arlington, Texas, Saturday, Sept. 25, 2021. (AP Photo/Tony Gutierrez)

Line: Texas A&M by 7 ½, according to FanDuel Sportsbook.

The Aggies need to get back on track and get their offense going a week after losing their first game in a 20-10 defeat by No. 8 Arkansas before top-ranked Alabama visits Oct. 9. Texas A&M has won the last two in the series. Mississippi State needs a victory after consecutive close losses to Memphis and LSU.

Texas A&M QB Zach Calzada vs. Mississippi State’s secondary. Calzada struggled against Arkansas in his second start since Haynes King broke his leg, throwing for just 151 yards with an interception. Now he’ll face a defense that ranks 98th in the nation by allowing 252.5 yards passing a game.

Texas A&M: DL DeMarvin Leal has at least five tackles in three of the team’s first four games. He has 2 ½ sacks and has broken up a pass this season.

Mississippi State: QB Will Rogers leads the SEC and ranks third in the country with 1,454 yards passing. He has thrown 11 touchdown passes, which is tied for eighth in the nation. Rogers has thrown for 370 yards or more in three of his four games this season, highlighted by a 419-yard performance in a loss to Memphis.

Mississippi State won three in a row in the series before losing the last two. ... The Bulldogs have at least one takeaway in six straight games. ... Mississippi State WR Makai Polk leads the team with 304 yards receiving. CB Emmanuel Forbes is the SEC’s active career leader in interceptions with seven. ... Texas A&M’s defense ranks second in the nation by allowing just 9.3 points a game. The unit ranks fourth in the country in yards passing allowed with 119.5. ... Texas A&M WR Ainias Smith is 18 yards shy of reaching 1,000 yards receiving in his career. TE Jalen Wydermyer holds Texas A&M’s record for most career TD receptions by a tight end with 12. RB Devon Achane is averaging 7.7 yards a carry through 12 career games, and RB Isaiah Spiller ranks sixth in the SEC with 86.25 yards rushing a game.