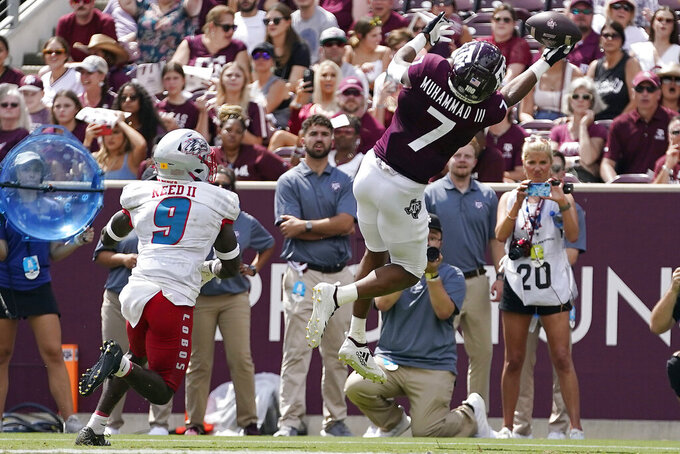 ARLINGTON, Texas (AP) — Arkansas coach Sam Pittman knows what the resurgent Razorbacks have to do to make their series against seventh-ranked Texas A&M a real rivalry again.

Things have been a bit one-sided since the Aggies joined Arkansas in the Southeastern Conference.

“The rivalry hasn't been a rivalry for the last nine years,” Pittman said. “You have to win for it to, you know, become a rivalry a little more. I know in the past, obviously, we have won more than we've lost in the rivalry, but in recent years we haven't done so well.”

No. 16 Arkansas and Texas A&M are both 3-0 going into their SEC opener Saturday in the home stadium of the NFL's Dallas Cowboys that are owned by Jerry Jones, a co-captain of the 1964 Razorbacks team that went undefeated.

The Aggies have won the last nine meetings against Arkansas, a streak that began in 2012 with their first-ever SEC win. Heisman Trophy-winning freshman quarterback Johnny Manziel threw for 453 yards and three TDs in that 58-10 win, the most lopsided game in the series dating to 1903 that Arkansas leads 41-33-3.

Texas A&M has also has an 11-game winning streak overall, its longest since a 12-0 regular season in 1992 before a loss to Notre Dame in the Cotton Bowl.

These Aggies have a suffocating defense that is coming off a 34-0 victory while holding New Mexico to only 122 total yards. They haven't allowed a point in seven consecutive quarters while giving up only 17 points total in three games. They also are the top passing defense, not allowing a 100-yard passer or a TD through the air.

“We care about the process more than the results," senior safety Leon O’Neal Jr. said. “Just do your job, and do it fast. We as a whole team have done that.”

Things will certainly get faster and more physical in conference play. The Razorbacks two weeks ago ran over Big 12 team and future SEC foe Texas.

KJ Jefferson, who was voted a team captain, last week became the first Arkansas quarterback since 2015 to pass for more than 350 yards and three TDs without an interception.

In his first start for A&M last week after Haynes King broke his leg, Zach Calzada completed 19 of 33 passes for 275 yards with three TDs and one interception, though he was sacked three times.

In their second season under Pittman, the Razorbacks have gone from not winning an SEC game in 2018 or 2019 to their first Top 25 ranking in five years. They are trying to start 4-0 for the first time since 2003, while Texas A&M last reached that mark with a 45-21 win over Arkansas in 2016, the last they met with both ranked.

“I thought about us being ranked 16th. I mean, I'd be lying if I said I hadn't, and we're proud of that,” Pittman said. “But there’s not a whole lot of time to really think about it," before pointing out the schedule still includes No. 1 Alabama, No. 2 Georgia, No. 13 Ole Miss and No. 23 Auburn.

“The biggest thing I'm proud of is the state of Arkansas is proud of the football team again,” he said.

The Razorbacks and Aggies are set to stay neutral through at least 2024, though they played in College Station last year because of COVID-19. But after that, the game is back at AT&T Stadium instead Arkansas having a chance to host on its campus.

“I don’t feel great about it, to be honest with you,” Pittman said. "I get the situation. I understand last year, but going over there and then going neutral ... we’re in a contract, I understand.”

The 12 career TD catches by junior Jalen Wydermyer are the most ever for a Texas A&M tight end. He had a career-best 92 yards receiving and two touchdowns last season when the Aggies jumped out to a 42-17 lead over Arkansas before giving up two late touchdowns. ... The Aggies have won their last six neutral sites since 2017, those coming at four different venues. They have won seven games at AT&T Stadium, including their last six there against Arkansas.