No. 18 Wisconsin's defense looks to get back on track 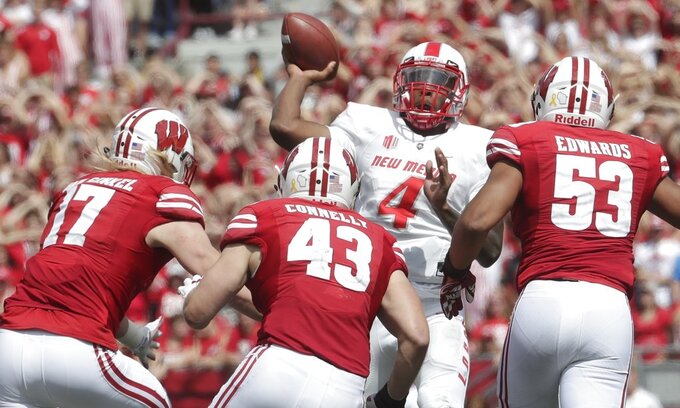 FILE - In this Saturday, Sept. 8, 2018, file photo, Wisconsin linebackers, from left, Andrew Van Ginkel, Ryan Connelly and T.J. Edwards pressure New Mexico quarterback Sheriron Jones (4) during the second half of an NCAA college football game against Wisconsin, in Madison, Wis. The Badgers remain a work in progress on defense as they prepare for their Big Ten opener this weekend against Iowa. Normally one of the top units in the nation, the 18th-ranked Badgers have been dented this year in non-conference play. (AP Photo/Morry Gash, File)

MADISON, Wis. (AP) — The Wisconsin defense is a work in progress.

Normally one of the top units in the nation, the 18th-ranked Badgers have been dented this year in nonconference play, particularly against the run.

Wisconsin has first-year starters at defensive end and outside linebacker. The most experienced returnee out of that bunch, outside linebacker Andrew Van Ginkel, is questionable with a right leg injury for the Big Ten opener on Saturday at Iowa.

There are new starters at cornerback, too, adding to the inexperience on the perimeter. Starter Scott Nelson at safety has played well for a redshirt freshman, but he's a new starter, too.

It can make for uncharacteristic days like the surprising loss to BYU last week, when the Cougars ran for 191 yards and two scores on 28 carries. The Badgers are 48th in the country against the run, allowing 130 yards per game.

"None of us arrived, there's never a point of arrival. I like some of the stuff they're doing," coach Paul Chryst said this week about the first-year starters on defense. "I really think guys are progressing, and yet if they can get more out of themselves and we can help them do that the whole season, you try to grow and get better."

It would help the Badgers (2-1) if they take a step forward on Saturday. Iowa might be Wisconsin's toughest roadblock to winning another West Division title.

BYU softened Wisconsin with motion plays, sweeps and spread formation. The Cougars prided themselves on keeping up with the Badgers' physical style but tested the edges early.

A meeting with Iowa is more like a grind-it-out, run-it-up-the-gut slugfest. The Badgers pretty much know what's coming.

"You can't stay even. You should always be getting better, whether it be attitude, physicality, what it is," Dixon said. "What I'm looking forward to is communicating more, talking more and playing with that confidence that we have."

Wisconsin's depth will be further tested if Van Ginkel, the senior and top pass-rusher, can't play.

"This was a good week of preparation. The intentions were right, guys were looking to get better," Chryst said on Thursday . "A season's a lot like a game ... you hope that every drive goes your way, but if it doesn't, how do you respond?"

The Badgers' strength lies up the middle with Dixon and playmaking inside linebackers T.J. Edwards and Ryan Connelly. Another senior, tackle Olive Sagapolu anchors the front.

They will be counted on to help steel their younger teammates for an important night game in front of a hostile road crowd at Kinnick Stadium.

"We're playing a very tough opponent. We have to match that intensity if we can in practice," said Edwards, a preseason All American. "Everyone has to look within themselves and figure out how to get better."