No. 2 Ohio State and No. 6 Michigan meet with high stakes 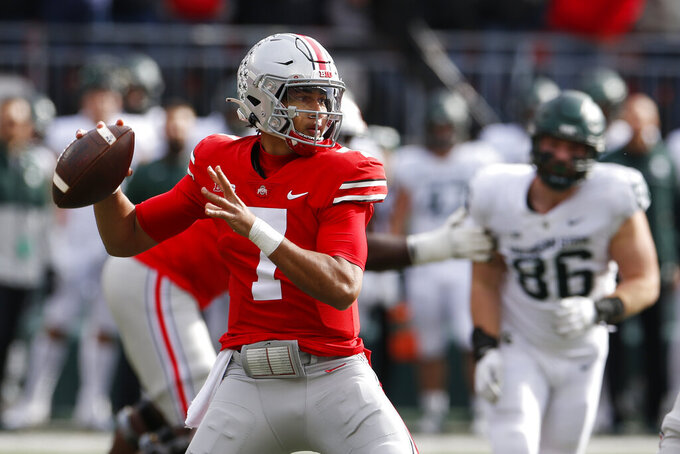 Ohio State quarterback C.J. Stroud drops back to pass against Michigan State during the first half of an NCAA college football game Saturday, Nov. 20, 2021, in Columbus, Ohio. (AP Photo/Jay LaPrete)

The victors claim the Big Ten East Division title, a spot in the conference championship game and a shot at being in the College Football Playoff. The loser falls out of Big Ten and national title contention and is left to wait for a second-tier bowl game invitation.

Ohio State's DL vs. Michigan's OL. The Buckeyes send waves of pass-rushing, run-stuffing linemen at opponents. Ohio State has eight linemen with more than one sack, helping it have a Big Ten-best 37 sacks, led by DE Zach Harrison and DT Haskell Garrett. The Wolverines have opened holes for the run game and protecting the passer, giving up just nine sacks to rank tied for fourth in the nation. RT Andrew Stueber, C Andrew Vastardis and the rest of the line has been good, but they will have to be great to help Michigan finally beat the Buckeyes.

Ohio State: QB C.J. Stroud. The seven-time Big Ten freshman of the week has thrown five touchdown passes in a school-record four games against conference teams this season. Stroud ranks among the nation's leaders in yards passing per game (346.8), TD passes (36) and by completing 71% of his attempts. Despite averaging nearly 35 passes per game, he has thrown just five INTs.

Michigan: QB Cade McNamara. He beat out and has held off highly touted freshman J.J. McCarthy for the job by making plays and minimizing mistakes. Since throwing an interception in the team's only loss at then-No. 8 Michigan State last month, he has thrown seven TDs without an INT.

Ohio State has won a school-record eight straight, one short of the series record Michigan set from 1901-09, and 15 of the last 16 matchups. ... The Buckeyes and Wolverines will meet for the 24th time — and third straight — as top-10 teams. ... The Game didn't happen last season for the first time in 102 years, a casualty of a COVID-19 outbreak within Michigan’s program that ended its season prematurely with an embarrassing 2-4 record. ... WR Chris Olave has caught a touchdown pass in eight consecutive games and his 13 TD receptions trail only Pittsburgh's Jordan Addison in FBS. ... Michigan DEs Aidan Hutchinson and David Ojabo have 10 sacks, two short of the single-season school record set by David Bowens in 1996.