No. 21 Texas A&M heads to Mizzou after 'Bama upset win 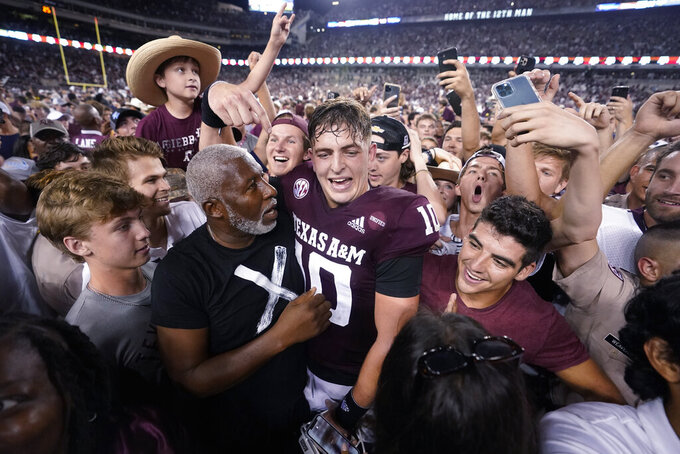 Line: Texas A&M by 9 1/2, according to FanDuel Sportsbook.

Texas A&M went from winless after two games in the SEC to the team that toppled mighty Alabama and jumped into the Top 25 in one weekend. Now the Aggies need to back up their performance against the Crimson Tide against Missouri, which is also trying to find its first SEC win. The Tigers are coming off a shootout win over North Texas that did little to solve their problems on defense, where they are among the worst in the nation in several statistical categories.

Texas A&M RB Isaiah Spiller carried it 17 times for 46 yards against the Crimson Tide. He figures to have more running room against the Tigers, who are giving up more than 307 yards per game on the ground. That is nearly 40 yards more than the second-to-worst team in Division I, Arkansas State.

Texas A&M: QB Zach Calzada threw for 285 yards with three touchdowns and one interception against the Crimson Tide. He took over when Haynes King broke his leg in early September and is showing some of the moxie that coach Jimbo Fisher expected to see from him.

Missouri: RB Tyler Badie has been the only sure thing for the Tigers this season. He needed just 17 carries to run for a career-high 217 yards and two touchdowns against the Mean Green last week. Badie has 675 yards rushing and eight TDs to go with 25 catches for 212 yards and four TDs through the air.

Despite being conference foes, this is the first meeting between Texas A&M and Missouri since Nov. 15, 2014. The Tigers have won two straight and five of the last six in the series. The Aggies' last win came on Nov. 11, 2012. ... The Aggies limited Alabama to 10 points in the first half, the fewest points the Crimson Tide had scored in the first half since being held scoreless by Georgia to start the 2017 national title game. ... Aggies RB Devon Achane's 96-yard kickoff return against Alabama was their first since 2018. ... Texas A&M WR Ainias Smith had two TD catches against the Tide to give him 13 for his career, tied with Albert Connell for 11th on the school's career list. TE Jalen Wydermyer is just ahead of him in ninth with 14. ... Badie has had two 200-yard rushing games this season. The only other Tigers to accomplish the feat are Brock Olivo in 1995 and Devin West in 1998.