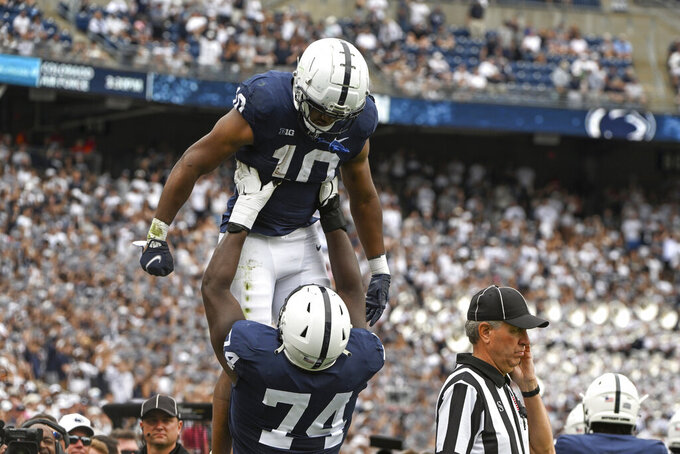 Line: Penn State by 3 1/2, according to FanDuel Sportsbook.

There's always the Big Ten versus Southeastern Conference theme. Penn State is trying to get its second road win over a Power Five team this season after winning the opener against Purdue. The Tigers have beaten weaker competition but barely survived against San Jose State. A team that dropped five straight games to end last season could use a win over a team like the Nittany Lions to convince skeptics that the Tigers have made significant strides.

Something has to give. Auburn has had one of the worst passing offenses in the nation so far, while Penn State has had trouble stopping the pass. The Tigers are averaging just 190 yards passing, 103rd nationally, while alternating quarterbacks T.J. Finley and Robby Ashford. The Nittany Lions rank 100th in defending the pass. Opposing offenses have averaged 264.5 yards per game through the air against them.

Penn State: Freshman RB Nicholas Singleton had the best Beaver Stadium debut among Nittany Lion rushers, with 179 yards on just 10 carries. He also had three runs of 44 or more yards, including a pair of long touchdowns.

Auburn: RB Tank Bigsby has been a bright spot in an offense that has sputtered at times. Bigsby has run for 198 yards and three touchdowns. He also ran 23 times for 102 yards in last year's meeting with Penn State.

This is the first time Auburn has hosted a Big Ten Conference team, and just the fourth regular-season game against a team from that league. ... Penn State is 24-24 against current SEC members, including 11-16 in regular season games. ... Auburn has won 17 straight home games against nonconference opponents dating back to the 2016 season. ... The Tigers' receivers have combined for just 15 catches for 265 yards without a touchdown through two games. Penn State had a program-record 17 different players with receptions in a rout of Ohio.