No. 25 Arizona State opens with 41-14 win over Southern Utah 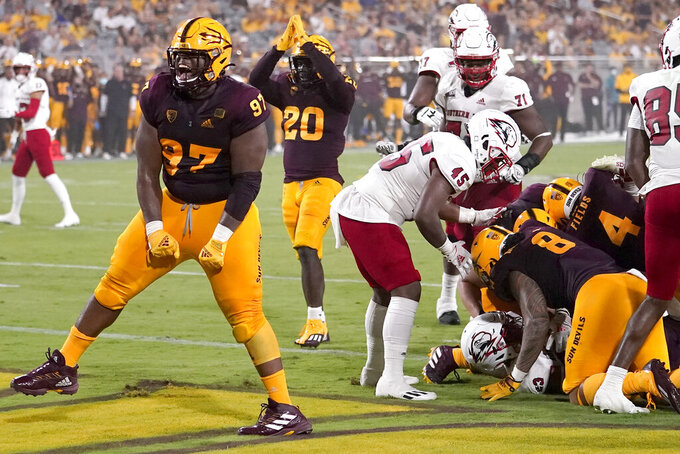 Everything else? Still needs some work.

Darien Butler had two interceptions and No. 25 Arizona State used its punishing run game to overcome some sloppy moments in a season-opening 41-14 win over Southern Utah on Thursday night.

The Sun Devils were a bit rusty to start a season of high expectations, committing numerous miscues on special teams and 13 penalties for 135 yards.

Arizona State still proved to be too much for the FCS Thunderbirds (0-2), forcing four turnovers and running for six touchdowns to win its 22nd straight home opener.

Rachaad White and DeaMonte Trayanum each ran for two scores.

“I told them we've got to clean this up,” said Arizona State quarterback Jayden Daniels, who threw for 132 yards before leaving in the third quarter with leg cramps. “We're a better team than Southern Utah, but at the end of the day if we play Washington or USC, those things can hurt us.”

The Thunderbirds had their chances thanks to and had some success moving the ball against the bigger, faster Sun Devils in their second game against an FBS opponent in five days.

They just picked the wrong times to make mistakes, turning over twice on Arizona State's end of the field.

“Couldn't start the game worse than we did and had an opportunity to take the lead, but had a turnover,” Southern Utah coach Demario Warren said. “We gave ourselves a chance.”

Expectations were on the rise in the desert headed into this season, Edwards' fourth at Arizona State.

The roster is full of players Edwards recruited, with talent and experience at nearly every position — a combination that put the Sun Devils among the favorites to win the Pac-12 South.

The first test was going to be more about themselves than the opponent.

The Thunderbirds went 1-5 during a pandemic-delayed spring season and were picked to finish 11th of 13 teams in the Big Sky. They also lost to San Jose State 45-14 five days earlier, so it wasn't expected to be much of a fight.

The rout appeared as it would start right away, even as the Sun Devils kept getting in their own way.

Facing pressure on Southern Utah's third play of the game, Justin Miller threw the first of his three interceptions right to Arizona State's DeAndre Pierce, who returned it 34 yards to the Thunderbirds' 4. Trayanum scored easily on the next play.

Southern Utah fumbled on its second drive — after getting a first down on an Arizona State roughing the kicker penalty — and White followed with a 26-yard TD run.

The Thunderbirds finally got something going on offense, setting up Judd Crockett's 7-yard touchdown run.

The momentum ended quickly with another turnover, Miller's second interception, and White followed with a 1-yard touchdown run. Trayanum's 20-yard touchdown run put Arizona State up 28-7 at halftime, well on its way to a lopsided-but-sloppy opening win.

“I think our guys know they can play with anybody after tonight,” Warren said. “The goal was to improve from Week 1 and I thought they played a ton better.”

Southern Utah was able to move the ball on offense at times but put itself in a tough spot with the turnovers to lose its 12th straight to an FBS opponent.

Arizona State did what it was supposed to against an FCS opponent but clearly has plenty to clean up heading into Week 2.

The first game of the season is typically filled with mistakes as teams try to shake off the rust.

The Sun Devils had plenty on special teams alone.

Logan Tyler started the game by sending the opening kickoff out of bounds for a penalty. Arizona State had two players run out late on its first extra point, which ended up getting blocked in the scramble.

The Sun Devils then gave Southern Utah a new set of downs on its next drive with a 15-yard penalty for roughing the punter. Poor coverage on a pooch kick late in the first quarter also led to a recovery by the Thunderbirds and Tyler missed a PAT early in the third quarter.