No. 3 Buckeyes face toughest test to date vs No. 13 Badgers 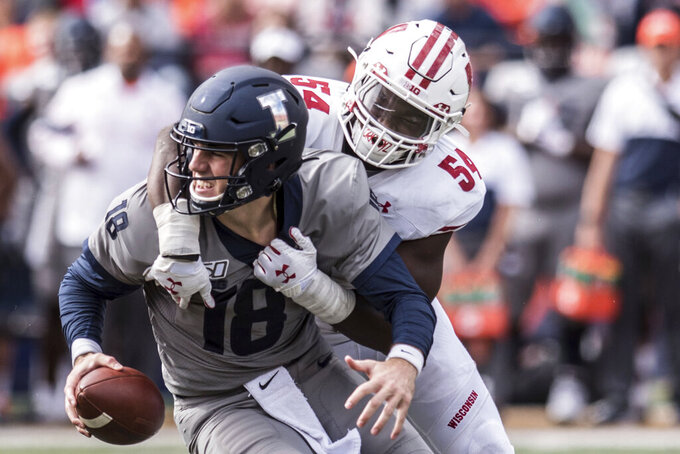 This game lost some of its luster when Wisconsin (6-1, 3-1 Big Ten) got upset at Illinois. There remains intrigue, though, because the Badgers stack up as the best opponent Ohio State (7-0, 4-0) has faced so far. Wisconsin and Ohio State are the top two defenses in the country, and five of the last six meetings have been decided by seven points or less. That makes it hard to imagine the Buckeyes continuing their streak of winning all their games by no fewer than 24 points. The Buckeyes have won 30 of their last 31 home games against Big Ten opponents, the only loss coming to Michigan State in 2015.

The Wolverines bring an aggressive pass rush and have 23 sacks in seven games, and they're allowing just 3.03 yards per rush. Notre Dame's line is doing a good job protecting Ian Book, giving up no sacks against Georgia, one against Southern California and a total of nine in six games. On top of that, the line is paving the way to 5.3 yards per carry.

Wisconsin's Jonathan Taylor needs 43 yards to become the fourth player in program history to record three straight 1,000-yard rushing seasons. ... Iowa (at Northwestern) is allowing 11.6 points per game, the fewest since 1965. The Hawkeyes' 275-yard defensive average is the lowest since 1984. ... Northwestern has nine scrimmage plays of 20 yards or longer, fewest in the nation and six behind the team with the second fewest (Army). ... . Minnesota (vs. Maryland) is 4-0 in the Big Ten for the first time since 1967 and last started 5-0 in 1961. ... Maryland opponents have converted just 1 of 10 fourth downs. ... Penn State (vs. Michigan State) is allowing an FBS-low 1.9 yards per rush. ... Michigan State is playing a third straight top-10 opponent. ... Rutgers (vs. Liberty) has had two four-game spans over the last four seasons in which it scored only 14 points. That's nothing compared to the 1936 team, which was held to seven points over its final seven games.

The Illini (3-4, ,1-3) are riding high after beating Wisconsin in the biggest upset of the season. Coach Lovie Smith has talked about the importance of "stacking wins" if his program is to move forward. This is an opportunity for Illinois to beat back-to-back Big Ten opponents for the first time since Tim Beckman's 2014 team did. Purdue has won three straight in the series and 11 of 14.