No. 4 Clemson still has path to national title, ACC crown 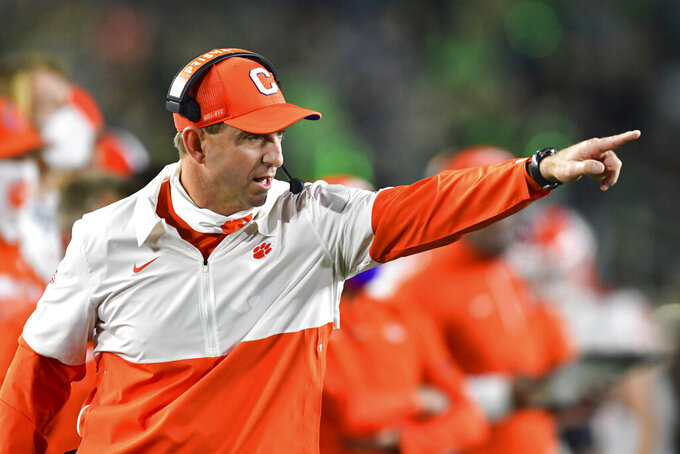 No. 4 Clemson won't spend its bye week worried about the college football's championship chase after the Tigers' suffered their first regular-season loss in three years.

A sixth-straight Atlantic Coast Conference title and third national championship in five years are still clearly within reach for the Tigers, despite Saturday's 47-40 double overtime loss at Notre Dame.

“We're looking forward, nothing behind,” said Clemson receiver Amari Rodgers, a senior who lost for just the fourth in his four seasons. “We've learned from the past and we're going to finish out the season strong.”

The Tigers (7-1, 6-1 ACC) have a week off before heading to Florida State on Nov. 21. They play a final home game with Pitt the following week before closing the regular season at Virginia Tech on Dec. 5. Get through that unscathed and one-loss Clemson (7-1, 6-1 ACC) would reach the league championship game for a likely rematch with the undefeated and second-ranked Fighting Irish.

Clemson holds a head-to-head tiebreaker over No. 9 Miami, handing the Hurricanes their lone loss 42-17 last month.

Defeat the Irish for the league crown, which would be no easy task given what occurred last week, and Clemson would assuredly return to the College Football Playoffs for a sixth straight season.

“We're getting ready to make this championship run,” said quarterback Trevor Lawrence, who watched the game against the Irish from the sideline.

Lawrence is back at meetings and workouts during the bye week after missing the past two games due to COVID-19. Lawrence spent 10 days in isolation after having a headache and sinus issues, eventually testing positive a few days before Clemson's game with Boston College on Oct. 31.

Now, Lawrence feels normal, “back to my old self,” he said Monday.

Lawrence traveled to Notre Dame with the team after his quarantine, although protocol for cardiac tests kept him out of the game. Seeing a healthy-looking Lawrence on the sidelines last Saturday left some wondering why he wasn't behind center instead of freshman backup DJ Uiagalelei.

“You want to do those (cardiac) scans,” Lawrence said. “It would've been impossible to play Saturday.”

Lawrence also won't play the “what if” game about him starting against Notre Dame.

“Obviously, I would've loved to have been in there and tried to do everything I can to win the game,” he said. “But at the same time, DJ played really well and I was proud of him.”

Uiagalelei threw for two touchdowns and 429 yards, the most ever by a quarterback against Notre Dame.

Clemson had every chance to win in regulation. The Tigers just couldn't get a stop on defense.

The Tigers trailed by 13 points in the opening half, yet led the Fighting Irish 33-26 with about three minutes left. Notre Dame rallied for the tying score, helped by Ian Book's 53-yard pass to Avery Davis to the Tigers' 4. Davis split two far-apart defenders for the crucial gain and three plays later caught the tying score to complete the 91-yard drive.

The important part of the off week is getting some rest for several of Clemson's injured defensive starters, end K.J. Henry said.

Henry said those on the outside may see cracks on Clemson's defense, which has given up 96 points the past three games after allowing just 60 in its first five.

But the Tigers have history in shaking off regular-season losses. In 2016, Clemson fell to Pitt at home and went on to a national title. A year later, the Tigers advanced to the CFP semis following a mid-season defeat to Syracuse.

“We're not stuck underground. We know what's at stake and the situation around us,” Henry said. “That's what a lot of people want, for us to look ahead. But in this house, we're going to respect who's next and get ready for that next opponent. That's all that matters right now.”