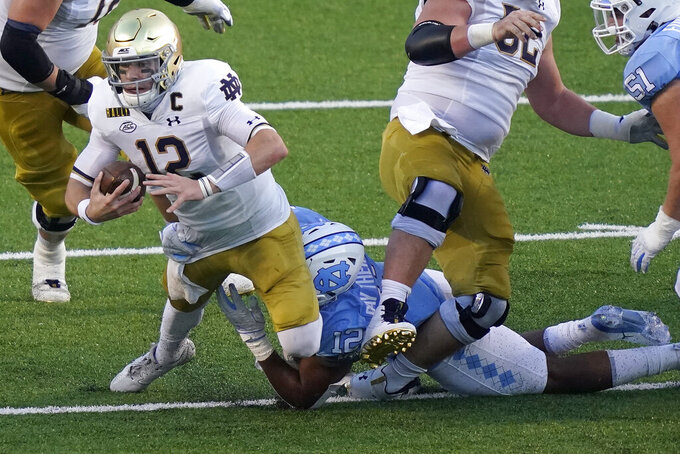 No. 4 Clemson at Virginia Tech. The Tigers (8-1, 7-1 Atlantic Coast Conference) can lock up a berth in the conference championship game — and a rematch with unbeaten No. 2 Notre Dame — with a victory. The Hokies are coming off a bye week that coach Justin Fuente said allowed him to give many of his veteran players a much-needed break. The teams last met in 2017, a 31-17 Clemson victory, and Virginia Tech (4-5, 4-4) comes into the game having lost three in a row. Depending on what happens with the postseason, the Hokies' nation's-best string of 27 consecutive seasons playing in a bowl game could be in jeopardy if they can't handle the Tigers and their regular-season finale against Virginia.

Boston College (6-4, 5-4) wraps up its first season under coach Jeff Hafley looking to remain perfect against Virginia (4-4, 3-4), which has won three in a row. The Eagles have won all six prior meetings, including a 41-10 rout at Scott Stadium in 2017. The Cavaliers have a slight edge offensively, averaging 31.1 points to the Eagles' 27.4, and Boston College has a slight edge defensively, allowing 403.6 yards per game to Virginia's 431.5. The Cavaliers are averaging 43.3 points during their winning streak.

Western Carolina at North Carolina. The Catamounts' (0-2) final game in a split season that will restart in February offers them their 59th opportunity to beat a team from the Football Bowl Subdivision, and they have failed to win any of their first 58 such opportunities. The Tar Heels boast one of the nation's most potent offenses, and Western Carolina has had trouble stopping its opponents. No. 25 Liberty beat them 58-17 and Eastern Kentucky handled them 49-17. The Tar Heels are averaging 40.2 points.

Brennan Armstrong, Virginia. Since returning from a concussion, the redshirt sophomore quarterback has been productive as a passer and runner. He's thrown for 10 touchdowns against just two interceptions in the four games and has run for at least 52 yards in each game. His four touchdown passes against Abilene Christian included connections covering 90, 56 and 52 yards as he finished with 383 passing yards on just 16 completions.