No. 5 Notre Dame looks to keep playoff hopes vs. Stanford 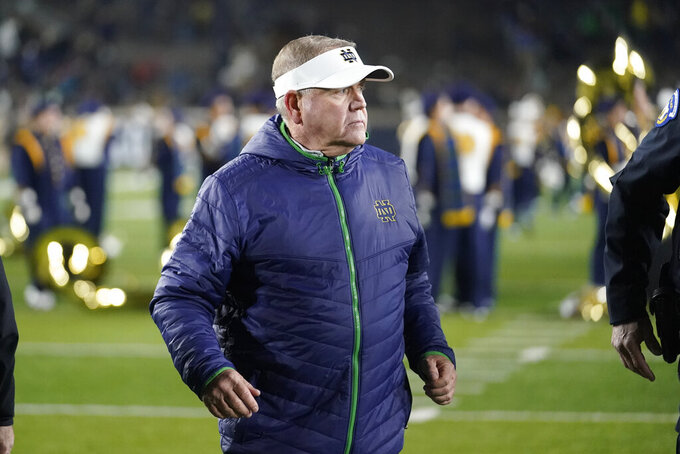 STANFORD, Calif. (AP) — All Notre Dame can do for now is prepare for the regular-season finale against struggling Stanford and wait.

The fifth-ranked Fighting Irish have found their groove in November and will be good position for a New Year's Six bowl and a possible spot in the playoff with a win against the Cardinal on Saturday night.

Notre Dame (10-1, CFP No. 6 ) is currently on the outside of the playoff picture but with a win against Stanford (3-8) and some help around the country the next two weeks, the Irish could have a chance at the playoffs for the third time in the past four seasons.

The Irish have done just that, outscoring Navy, Virginia and Georgia Tech by a 117-9 this month after struggling to put teams away early in the season.

Notre Dame lost at home to Cincinnati on Oct. 2 and won three of its first six games by only three points.

“At the beginning of the season, we struggled jelling as a team," running back Kyren Williams said. "Later on, after Virginia Tech and the bye week, we’ve really kicked it into a different gear. You could see we had a different mindset. ... I really feel we’re playing in harmony, showing the world who we are.”

Stanford is headed in the other direction, having lost six straight games since an upset of then-No. 3 Oregon the same day Notre Dame fell to Cincinnati.

The Cardinal are coming off a 41-11 home loss to California in the Big Game and are now just playing for pride.

“We’ve obviously had a lot of games that didn’t go the way that we wanted to,” quarterback Tanner McKee said. “So we kind of have to practice with a chip on our shoulder and come out and not just expect for things to change but to come out and play angry."

HOMECOMING Notre Dame's annual season-ending trip to California is always a highlight for the players from the state. The Irish end each regular season with trips to either Stanford or Southern California.

Defensive end Isaiah Foskey, who grew up across San Francisco Bay in Antioch, said there is always “extra juice” playing back in the Bay Area.

Defensive back TaRiq Bracy, who went to high school in nearby Milpitas, said he expects plenty of supporters in the stands.

“I have a lot of friends who have been texting me and I’m excited about going home for a bit,” Bracy said. “Back in high school, I played in Palo Alto many times. It’s like going full circle coming back to play. It’s going to be good to have my high school coach, Coach (Kevin) King to come and watch me.”

The Cardinal are on their longest losing streak since starting 0-9 in 2006 under coach Walt Harris. Jim Harbaugh arrived on The Farm the next year and started to build Stanford into a powerhouse that David Shaw continued for most of the last decade. But Stanford has fallen on tough times of late, going 4-8 in 2019 and now in danger of the first nine-loss season since that 1-11 campaign in 2006.

“I feel the execution of technique, we’re getting better and better,” Foksey said. “That’s why we’ve gotten so many sacks.”

Stanford has been plagued of late by allowing big plays. The Cardinal have allowed 11 plays from scrimmage this season of at least 50 yards, second most in the nation. Six of those plays have come in the past three games, including three against Cal last week.

“One guys misses a tackle, then we’re off to the races,” Shaw said. “So not good enough by any stretch of the imagination.”