No. 5 Notre Dame looks to maintain playoff hopes vs Stanford 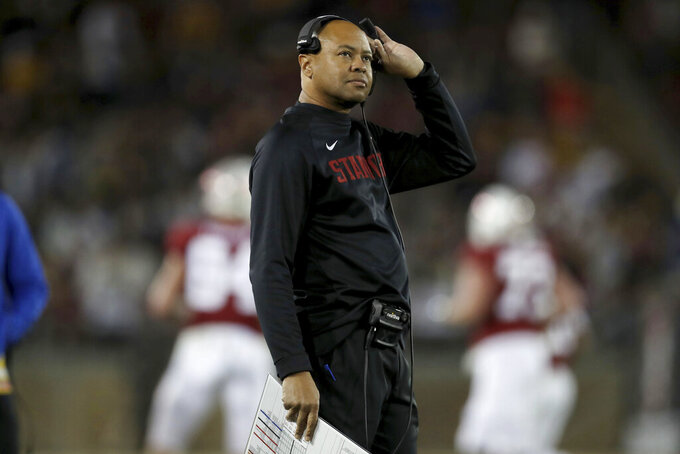 Stanford coach David Shaw stands on the sideline during the first half of the team's NCAA college football game against California in Stanford, Calif., Saturday, Nov. 20, 2021. (AP Photo/Jed Jacobsohn)

Line: Notre Dame by 20 ½, according to FanDuel Sportsbook.

The Fighting Irish will be in position for a spot in a New Year's Six bowl with a win and can keep their College Football Playoff hopes alive. The Cardinal are looking to snap a six-game skid and avoid their first nine-loss season sine 2006.

Notre Dame: Tight end Michael Mayer moved into second for most receptions by a Notre Dame tight end in a season with 55. Tyler Eifert has the record with 63 in 2011. Mayer has gotten a first down on 34 of the 55 catches.

Stanford: QB Tanner McKee returned last week after missing two games with an injury but didn't look sharp against California. He went 27 for 44 for 247 yards with no touchdowns and two interceptions.

Stanford has won five of the past six home games in the series. ... Notre Dame has won at least 10 games in five straight seasons for the first time in school history. ... The Irish are tied for fifth nationally with 15 INTs, their most since having 16 in 2014. ... Notre Dame has won 41 straight games against unranked opponents, the longest active streak. ... The Irish have not allowed a TD in three straight games for the first time since 2012. ... The six-game losing streak for the Cardinal is their longest since starting 0-9 in 2006. ... Stanford allowed 636 yards last week against California, the most for the Cardinal since giving up 663 to Notre Dame in 2005. ... Stanford has been outscored 93-18 in its past two home games.