No. 7 UCF, Memphis not strangers to AAC championship game 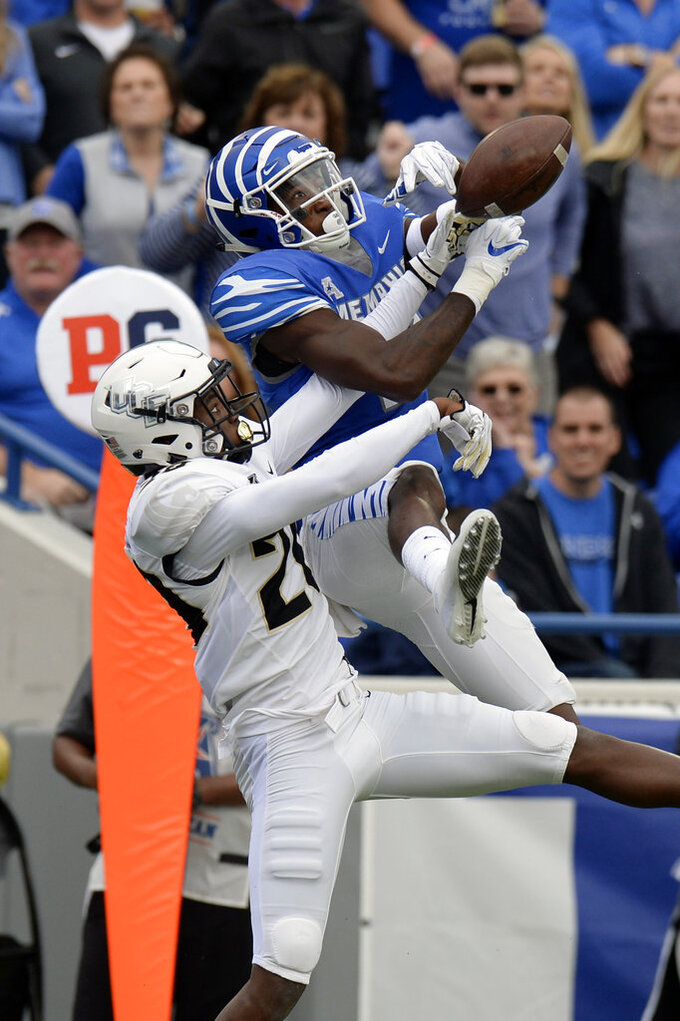 FILE - In this Oct. 13, 2018, file photo, Central Florida defensive back Brandon Moore (20) breaks up a pass intended for Memphis wide receiver Damonte Coxie (10) during the first half of an NCAA college football game, in Memphis, Tenn. The seventh-ranked Knights (11-0, 8-0, No. 8 CFP) are one victory away from their second straight American Athletic Conference championship, a likely New Year's Six bowl bid and bolstering their argument that they are deserving of consideration for a berth in the College Football Playoff. None of that is possible, though, without beating Memphis (8-4, 5-3) in Saturday's AAC title game. (AP Photo/Mark Zaleski, File)

ORLANDO, Fla. (AP) — There are no shortcuts in unbeaten UCF's quest for perfection.

The seventh-ranked Knights (11-0, 8-0, No. 8 CFP) are one victory away from their second straight American Athletic Conference championship, a likely New Year's Six bowl bid, and bolstering their argument that they are deserving of consideration for a berth in the College Football Playoff.

None of that is possible, though, without beating Memphis (8-4, 5-3) in Saturday's AAC title game.

"Really, we still don't focus on that. We've had 11 months of work that have led us to this opportunity: win a conference championship," coach Josh Heupel said.

"We don't have to do anything out of the ordinary, but we do have to have a heightened sense of urgency and have great attention to detail because we're playing a great opponent," Heupel added. " I expect a great ball game, one that will come down to the end, and we have to compete for 60 minutes."

While that may sound like a bunch of hyperbole, there are plenty of reasons for Heupel to feel that way — beginning with UCF playing without injured quarterback McKenzie Milton, the two-time AAC offensive player of the year.

This will be the fourth time the Knights and Tigers have faced each other in two seasons. And even with Milton in the lineup, the past two matchups — UCF's 62-55 double overtime victory in last year's conference title game, and the Knights' 31-30 come-from-behind win at Memphis in October — are among the closest calls the defending champs have had during a nation's-best 24-game winning streak.

"We've had a couple of extraordinary games in these last couple years. But at critical times we've made mistakes and they've made some plays that have been the difference," Memphis coach Mike Norvell said.

"We can't do things that hurt ourselves. You understand that these guys are going to make plays; they are talented in every phase," Norvell added. "If we continue to focus on ourselves, I have a tremendous amount of confidence in our football team and what we can do."

Some things to watch and know about UCF and Memphis, which won four straight following a 1-3 conference start to win the West Division:

Milton, eighth in Heisman Trophy balloting a year ago, suffered a severe right leg injury during UCF's regular-season finale at South Florida. On his way to repeating as the conference's top offensive player, he threw for 2,663 yards and 25 touchdowns vs. six interceptions. Milton also rushed for 307 yards and nine TDs.

Heupel said the Knights will be playing for the junior from Kapolei, Hawaii.

"Absolutely," Heupel said. "Everybody in our program understands what KZ has meant as a player, but also in the spirit of who he is and how he prepares every day. Our players love him and appreciate everything that he's done. They're going to play for themselves, and the guy next to them, and they're certainly going to play for KZ."

With Milton out, redshirt freshman Darriel Mack Jr., will make his second start of the season. He led a road victory over East Carolina in October and directed the offense for the final two-plus quarters of last week's rout of South Florida.

UCF believes it has enough playmakers around Mack, including running backs Greg McCrae and Adrian Killins Jr., and receivers Gabriel Davis, Dredrick Snelson and Tre Nixon, to help the young quarterback be successful.

"We have complete confidence in him, and we expect him to play in a great way," Heupel said.

"He's been explosive as a runner and shows tremendous arm strength being able to push the ball down the field," Norvell added. "The success that he's had shows a lot about the young man. I think that he will present a great challenge for us."

The Knights rank among the nation's best in total offense and scoring at 531.4 yards and 43.1 points per game. The Tigers aren't slouches at 530.2 and 43.8. Memphis running back Darrell Henderson is the nation's second-leading rusher with 1,699 yards and 19 rushing TDs. The junior is averaging 8.58 yards per game and has 10 rushes of 40-plus yards, 13 plays of 40-plus yards overall.

"He's got great vision and the ability to make you miss, and he's got enough power to run through you as well," Heupel said. "He's electric when he gets into space and can turn a 5-yard gain into a big one real quick."

UCF finished last season as the only undefeated team in the FBS. The Knights are one of four unbeaten teams entering Saturday, along with Alabama, Clemson and Notre Dame.