No. 8 Oklahoma St. expects another close game with Cyclones 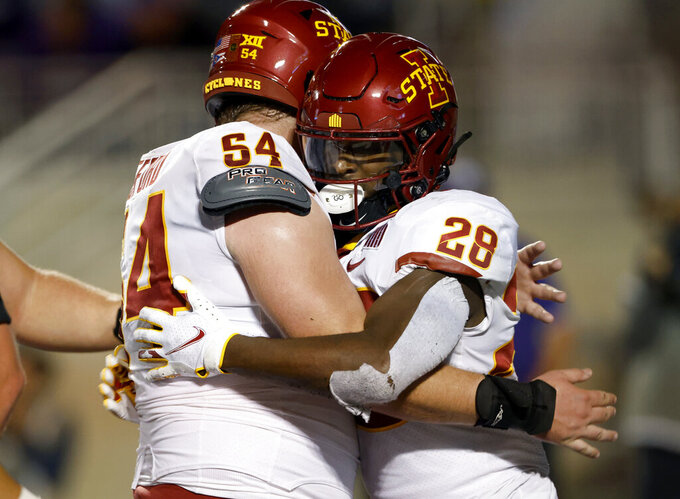 No. 8 Oklahoma State has proved it can win close games, and recent history indicates the Cowboys will play another one Saturday when they visit Iowa State.

Each of the last six meetings has been decided by seven points or less, with the Cowboys winning all but one. Four of their six wins this season have been by eight points or less.

“We’re not physically and skill-wise overwhelming like we were and have been in years past on really good teams where we know that we’re going to come out of this game and win by 20 points," coach Mike Gundy said. “That’s not the type of football team we have right now.”

Oklahoma State (6-0, 3-0 Big 12) in 2021 is built around the conference's top defense and a middling offense that's gotten more than expected from running back Jaylen Warren.

“I don’t think any of us would’ve predicted at this point that Jaylen Warren would’ve been a marquee player,” Gundy said. “We are fortunate. Jaylen Warren is humble, unselfish and tough. That’s the mold we’ve directed ourselves to offensively with his leadership.”

Quarterback Spencer Sanders has been steady if not spectacular. He's passed for six touchdowns but is tied for most interceptions in the Big 12 with five. He's run for three TDs, including a 10-yard scramble for the game-winner against Texas last week.

“He can make you pay fast with his feet, and maybe he’s got the quickest release of any college quarterback in the country right now,” Cyclones coach Matt Campbell said. “The ability for him to get the ball out of his hands and know where that ball’s going is exceptional.”

Iowa State (4-2, 2-1) has convincing October wins over Kansas and Kansas State and appears to be following its pattern of improving as the season progresses.

Brock Purdy played his most efficient game last week, completing 22 of 25 passes for 208 yards and a touchdown, and Breece Hall ran for a career-high 197 yards in his fourth straight 100-yard game.

“Obviously, we do a great job of establishing the run,” Purdy said. “So having Breece make plays gives me a lot of poise and confidence in my game. It’s not all on my plate because Breece is going to make plays.”

Iowa State is a 6 1/2-point favorite, according to FanDuel Sportsbook.

The Cowboys are the highest ranked team this season to be listed as an underdog against an unranked opponent, according to Associated Press research.

Since 2017, Iowa State is 6-4 when playing a Top 25 team while unranked, with two of those wins against top-10 opponents.

MALCOLM IN THE MIDDLE

Oklahoma State's Malcolm Rodriguez was voted midseason Big 12 defensive player of the year by Associated Press sports writers who cover the league. He's eighth in the FBS with 10 tackles per game. He led Power Five linebackers in tackles last season.

Hall, who wears jersey No. 28, has at least one rushing touchdown in a Big 12-record 18 straight games, and his 3,217 career yards are the most by an active Power Five player.

“No. 28 is very patient and runs a lot like Thurman Thomas used to run,” said Gundy, referring to the Cowboys' star of the mid-1980s. "He’ll wait and then hit a seem. He’s a very patient runner and productive at what he gets accomplished.”

Oklahoma State's defense has allowed opponents to convert only 25 of 87 third downs, a rate of 28.7% that ranks first in the Big 12 and ninth nationally. The Cowboys have forced at least seven three-and-outs in each of the last three games.

WHERE IT ALL STARTED

Oklahoma State brings back memories for Purdy, who burst onto the scene when he entered the 2018 game in Stillwater and threw for four touchdowns and ran for a fifth in the Cyclones' 42-35 win. Purdy has been the starter ever since.

“Every once in a while I'll go back and watch it to remind myself I came in with some passion in that game to show my teammates, ‘Hey, we can do this, we’re good enough’ and everything like that. Sometimes when I feel like I’m not playing like myself, I actually go back to that game more than anything just to remind myself, ‘Hey, this is who I am.’ ”