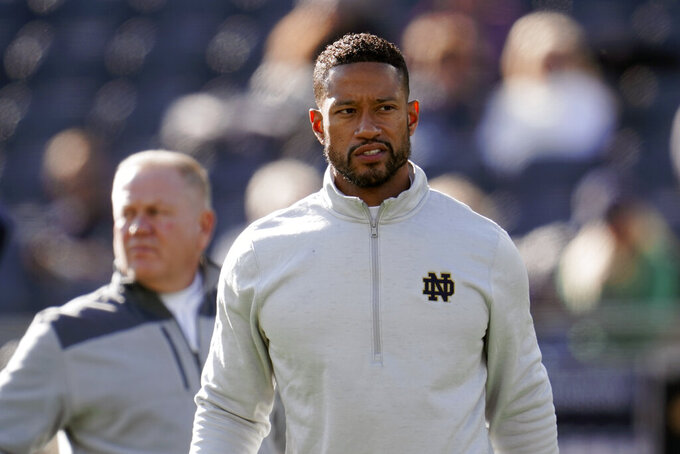 Freeman, 35, takes over less than a week after Brian Kelly’s surprising departure for LSU with the Irish still in contention for the College Football Playoff.

Notre Dame posted a video on social media of Freeman being introduced to the team at a morning workout for the first time as head coach.

“Marcus’ ability to connect with people, his fit at Notre Dame and the way he coaches young men set him apart as we went through our search process,” athletic director Jack Swarbrick said in a statement. “I can’t wait to see how the culture created by these remarkable student-athletes continues to grow under the tutelage of Marcus and his staff.”

In a statement, Freeman said he was “eternally grateful” to both Notre Dame President Rev. John Jenkins and Swarbrick for the opportunity.

"Notre Dame is a very special place and I look forward to pursuing a national championship with the most outstanding student-athletes, coaches and staff in college football,” Freeman said.

Notre Dame scheduled a news conference on campus with Freeman for Monday.

Swarbrick said Tuesday, just hours after a brief 7 a.m. meeting in which Kelly said goodbye to the team, that Notre Dame would conduct a thorough search for the storied program's 30th coach. The search didn't last long as word began to leak Wednesday afternoon that Freeman was Notre Dame’s choice.

Notre Dame officials acted fast to keep most of its staff together, with Kelly interested in bringing Freeman, offensive coordinator Tommy Rees, recruiting coordinator Mike Elston, strength and conditioning coach Matt Balis and others to Baton Rouge. Promoting Freeman was the final piece of the puzzle on Friday.

“No one is more deserving! This program is just getting started… Time to work! #FreemanEra,” linebacker JD Bertrand posted on Twitter.

Notre Dame is on a run of five consecutive seasons with double-digit victories, and its leadership decided to prioritize continuity while also taking on the risk of handing over the top job to a first-time head coach who is one of the newest members of Kelly's staff.

Kelly, who became Notre Dame's winningest coach in 12 seasons at the school, hired Freeman away from Cincinnati after the 2020 season. The former Ohio State linebacker spent four seasons with the Bearcats, helping Cincinnati develop into a playoff contender.

At Notre Dame, Freeman helped the Irish go 11-1 in what was expected to be a transition season after making the playoff. He also established himself as a vital recruiter for Notre Dame.

Less than two weeks before college football's early signing period, Notre Dame has a class of verbally committed prospects that ranks fifth in the country, according to 247 Sports.

“Marcus Freeman has not only proven himself a superb football coach, he has shown – both in his time at Notre Dame and in my conversations with him this week – that he is a person of highest integrity who cares deeply about our student-athletes and is committed to their success in the classroom as well as on the field,” Jenkins, who is in Rome, said in a statement.

The Fighting Irish have won seven straight games since their 24-13 loss at home to Cincinnati (CFP No. 4). They allowed just two touchdowns in four November games.

Independent Notre Dame is No. 6 in the CFP rankings and idle heading into conference championship weekend. But it still has a shot to be selected for the playoff. If the help the Irish need doesn't come, they are still in position for New Year's Six bowl, possibly a bid to the Fiesta in Arizona.

The Notre Dame defense got off to a shaky start under Freeman, but finished strong to rank sixth nationally in interceptions (15) and defensive touchdowns (four), seventh in sacks (40), 11th in takeaways (23) and scoring defense (18.2 points per game) and 18th in third-down conversion percentage (.329).