Okla QB Rattler out in 2nd qtr, back later vs No. 22 Texas 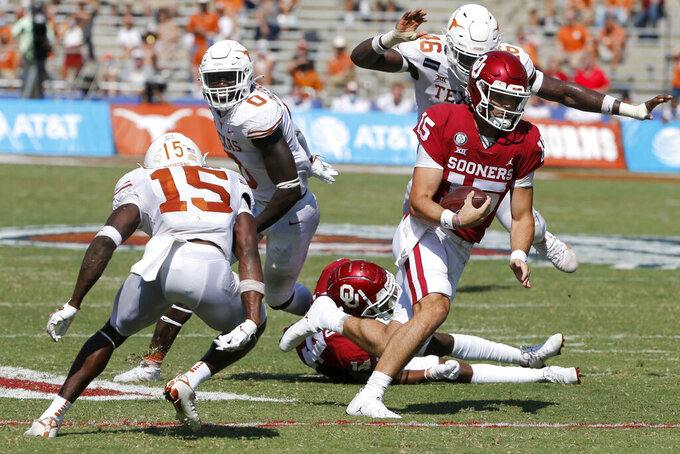 DALLAS (AP) — Oklahoma quarterback Spencer Rattler returned in the second half against No. 22 Texas after being replaced following two turnovers before halftime Saturday.

It wasn’t clear if the freshman sat out most of the second quarter because of injury or ineffectiveness. After he was replaced by sophomore Tanner Mordecai, Rattler was holding his helmet on the sideline while rubbing and shaking his right arm.

Rattler didn't come back out after fumbling on a sack for a turnover on his second straight possession. But he returned for the opening possession of the second half, and the Sooners scored a touchdown after starting on the Texas 16-yard line.

Rattler's first turnover was an interception by returned to the Okahoma 11 by DeMar Overshown on the final play of the first quarter. The Sooners held Texas to a field goal.

The fumble by Rattler at the OU 19 resulted in the first Texas touchdown. When Mordecai came out for the next Oklahoma possession, Rattler was holding his helmet on the sideline while rubbing and shaking his right arm.