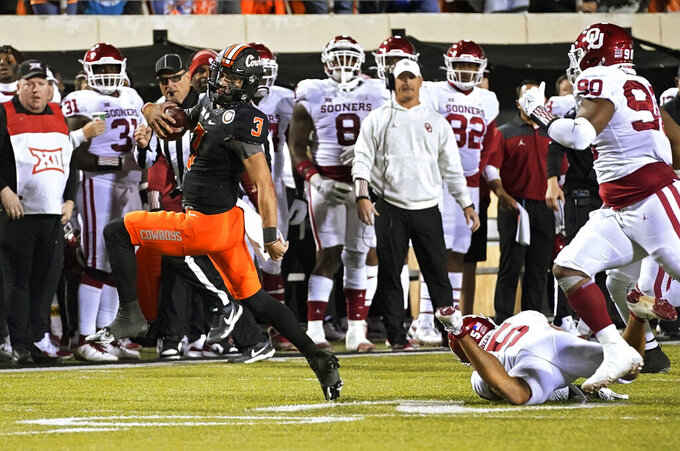 With one more win and a little help, the fifth-ranked Cowboys could be one of the four teams in the actual College Football Playoff. A victory in their first conference championship game also would give them their second Big 12 title.

“Essentially, we’ve been in a playoff run week to week or Big 12 championship run the last four weeks,” Gundy said. “If you don’t win these last three or four, win enough of them, you don’t get in the game anyway.”

A week after a rivalry win in Bedlam that knocked six-time defending Big 12 champion Oklahoma out of contention, Oklahoma State (11-1, No. 5 CFP) plays ninth-ranked Baylor (10-2, No. 9 CFP) in the Big 12 championship game Saturday at the home stadium of the NFL’s Dallas Cowboys.

When Oklahoma State won the Big 12 title in 2011, it was the first of six consecutive seasons the league didn’t have a championship game. That was also three years before the debut of the four-team playoff. With a win on Saturday, the Cowboys could be positioned to make the CFP, depending on what happens with Georgia, Michigan, Alabama and Cincinnati in their conference title games.

“It’s hard not to look at it,” Oklahoma State safety Tanner McCalister said. “I want to sit up here and say I’m thinking about this game, which obviously we are, but we know what’s at stake.”

The Cowboys were going to be in the Big 12 title game no matter what happened against the Sooners in the Bedlam game. But winning prevented back-to-back games against their in-state rival and put Baylor in the championship game.

Baylor lost 24-14 loss at Oklahoma State on Oct. 2 in its lowest-scoring game of the season.

“The first thing that pops out, that was our first really road environment,” Baylor coach Dave Aranda said. “Pressure creates abnormal behavior ... there were a lot of unforced errors in that game, things unfortunately that we could control that we didn’t do a very good job with.”

Still, the Bears are in their second Big 12 title game in three seasons. They made it in coach Matt Rhule’s final season before he went to the NFL, and they have returned. They went 2-7 last year in Aranda's pandemic-altered debut, then added offensive coordinator Jeff Grimes.

“When I got here, I saw the talent and the work ethic, and then with the new staff coming in I knew there was a different mindset going on, and everyone was moving in the same direction,” transfer receiver Drew Estrada said. “When you have that going on and start winning games and have the momentum, you see what’s happened this year.”

GETTING OVER A WIN

The 37-33 win over Oklahoma snapped a six-game skid in Bedlam, and was only the Cowboys’ third victory in the last 19 meetings.

“It was like a dream come true, just because I’ve been watching the Bedlam games my whole life growing up,” receiver Brennan Presley said.

Gundy said his team is mature enough to regroup.

Oklahoma State senior Jaylen Warren, a transfer from Utah State, has averaged 108.8 yards rushing in his 10 starts. He is fifth overall in the Big 12 with his 94.5 yards per game, and has 11 TDs.

Baylor’s Abram Smith is the Big 12's second-leading rusher and averages 113.8 yards per game to go along with 12 TDs. He had 97 yards on 10 carries, including a 55-yard run, two months ago against Oklahoma State. The Cowboys have the nation’s sixth-best rushing defense, allowing only 93.6 yards per game, and they have allowed just nine rushing touchdowns.

If the Cowboys make the CFP, they could possibly play again at AT&T Stadium since the Cotton Bowl there is a playoff semifinal. If not in the CFP, they would go to the Sugar Bowl.

Baylor went to the Sugar Bowl two years ago as the Big 12 representative even after losing the league title game to playoff-bound Oklahoma. The Bears could get back to the Sugar Bowl, win or lose, depending on Oklahoma State’s playoff fate.

Baylor linebacker Terrel Bernard missed the last two regular-season games against Oklahoma State because of injury. The October game against the Cowboys was the only one he has missed this season.

“You go into a game like this, you want Terrel on your side,” Aranda said. “I’m excited for him. You look at someone that has poured his heart out for this place and has been a stalwart on way different ways of getting stuff done.”

This is the first time Oklahoma State will play the same team twice in a season since 1908. Baylor lost twice to Oklahoma two seasons ago. ... The Cowboys have a chance to beat top 10 teams in back-to-back games for the second time. The only time was in October 1976.