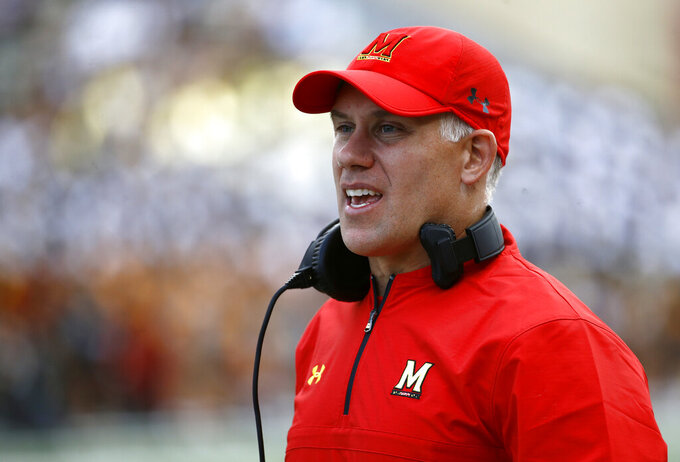 FILE - In this Saturday, Sept. 9, 2017, file photo, Maryland head coach DJ Durkin stands on the sideline during an NCAA college football game against Towson in College Park, Md. Former Maryland coach D.J. Durkin, who was fired during the 2018 season following the death of a player who had collapsed during offseason conditioning drills, was hired Thursday, Jan. 2, 2020, as an assistant by Mississippi. Durkin, who spent last season as a consultant with the Atlanta Falcons, will join new Ole Miss coach Lane Kiffin's defensive staff. (AP Photo/Patrick Semansky, File)

Former Maryland coach D.J. Durkin, who was fired during the 2018 season following the death of a player who had collapsed during offseason conditioning drills, was hired Thursday as an assistant by Mississippi.

Durkin, who spent part of this past season as a consultant with the Atlanta Falcons, will join new Ole Miss coach Lane Kiffin's defensive staff.

Durkin had stints as defensive coordinator at Michigan and Florida, building up a reputation as a top recruiter, before being hired as Maryland head coach at age 37. He went 10-15 in two seasons at Maryland, but his tenure ended abruptly amid scandal.

“We received consistently strong feedback about Coach Durkin's strong character and work ethic and his positive impact on the communities and institutions where he was previously employed,” Carter said, “Once we had the chance to spend time with Coach Durkin, we were even more convinced that he is exactly the type of accomplished coach with strong football credentials who is also a proud and committed family man that will make him a great addition to our new staff.”

On May 29, 2018, offensive lineman Jordan McNair, a 19-year-old sophomore, collapsed during conditioning drills because of heat-related illness. McNair died on June 13.

An independent investigation determined athletic trainers on the scene did not follow proper procedures to treat McNair for possible heatstroke. Durkin was not found responsible for McNair's death, but he was fired in October after having been placed on administrative leave to start the season.

“We wish the best for him and his family and hope he'll take what happened at Maryland as a serious life lesson in dealing with other people's kids," Jordan's father, Marty McNair, told ESPN on Thursday.

News reports of dysfunction in the football program — first from ESPN — emerged after McNair's death. Durkin and his strength and conditioning coach, Rick Court, were accused by some players of creating a toxic culture where some were demeaned and bullied.

Court was put on administrative leave by the school and eventually resigned.

Other players and their parents supported Durkin and wanted him to remain Maryland's coach.

The school commissioned an investigation into the culture of the football program under Durkin and the board of regents decided to retain the coach, saying he was "unfairly blamed for the dysfunction in the athletic department.”

The next day, Halloween 2018, facing scrutiny and criticism from the public and politicians, University of Maryland president Wallace Loh fired Durkin.

Durkin has been out of college coaching since.