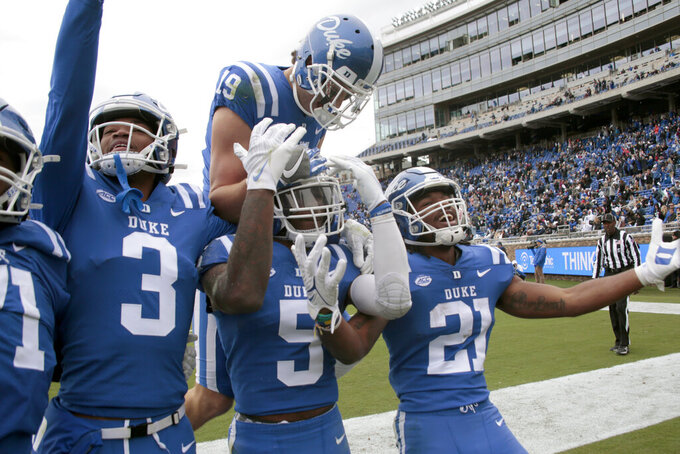 DURHAM, N.C. (AP) — Kenny Pickett threw three touchdown passes and ran for a score as Pittsburgh pulled away to beat Duke 54-29 on Saturday.

“Just got back into a rhythm, playing our game,” Pickett said of an offense that generated 636 yards of total offense. “Getting into the rhythm of the game.”

Sam Scarton kicked four field goals on his 21st birthday for Pittsburgh, which leads the ACC’s Coastal Division and improved to 4-0 in road games. Jordan Addison, who scored on a reception and a rush, racked up 171 receiving yards on seven catches.

“Road victories are big and we got a lot of guys in there that played,” Pittsburgh coach Pat Narduzzi said.

Duke (3-6, 0-5) lost its fifth game in a row. Quarterback Gunnar Holmberg exited with an upper-body injury on the team’s final possession of the first half after throwing for 174 yards and a touchdown. Running back Mataeo Durant gained 89 yards on 24 carries.

Pittsburgh went ahead for good on Pickett’s 22-yard scramble with four minutes left in the first half after an array of potential momentum-turning plays. The Panthers led 30-19 at halftime, with Scarton connecting on his third field goal in an eight-minute span on the final play of the half.

“These guys are good on offense,” Duke coach David Cutcliffe said of the Panthers. “We didn’t cover them close enough. We didn’t get them enough pressure on the quarterback.”

Duke drove to the Pittsburgh 1-yard line on the game’s opening possession before Durant’s fumble and a wild chase for the ball. Pittsburgh responded, going 76 yards in seven plays with Pickett hitting Jared Wayne on a 10-yard scoring pass.

Moments later following a Pickett fumble, Duke was denied on Durant’s fourth-down run from the Pittsburgh 1.

“Our defense continues to be very, very good on fourth down,” Narduzzi said.

But the next play, Pittsburgh running back Vincent Davis Jr. was tackled in the end zone for a safety.

Pittsburgh: The Panthers eclipsed the 40-point mark for the sixth game this season, but for the first time in more than a month. This was the third time they’ve gone above 50 points.

Duke: Durant eclipsed the 1,000-yard rushing mark in the first quarter. He became Duke’s first 1,000-yard rusher since Chris Douglas in 2003. Durant is the sixth player in program history to reach 1,000 rushing yards in a season.

Addison’s 47-yard catch in the second quarter gave him 11 touchdown receptions, ranking among the nation’s leaders. That’s the most for a Pittsburgh player since Larry Fitzgerald’s 22 in 2003. Addison scored in the third quarter on a 2-yard play that was ruled a rushing play.

“He’s having an incredible year,” Pickett said. “Something I think we all saw coming.”

The Panthers recorded six sacks, including five in the second quarter.

“We just kind of knew what they were doing by that time,” Pittsburgh linebacker Phil Campbell III said. “We just started letting it go.”

Pittsburgh could move back into the AP Top 25 after slipping out this week following a two-week stay and rising to as high as No. 17.