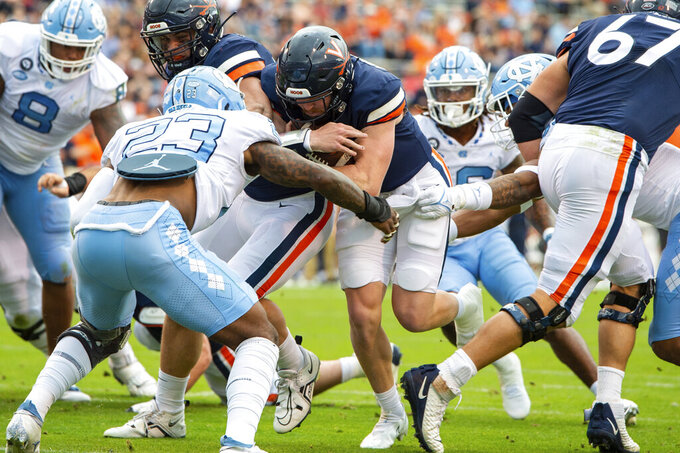 Virginia quarterback Brennan Armstrong (5) drives ahead for a touchdown run against North Carolina linebacker Power Echols (23) during the first half of an NCAA college football game on Saturday, Nov. 5, 2022, in Charlottesville, Va. (AP Photo/Mike Caudill)

Line: Pitt by 3 1/2, according to FanDuel Sportsbook.

The Panthers can achieve bowl eligibility with a victory, and they've won six of eight against the Cavaliers since joining the ACC, including a 48-38 shootout last season that clinched the Coastal Division for the Panthers. Virginia needs to sweep its last three games — Coastal Carolina and at Virginia Tech — to reach the postseason in Tony Elliott's first year as coach.

Virginia's offensive line against Pitt's defensive front. The Panthers rank fourth in the ACC with 29 sacks, led by SirVocea Dennis (6 sacks) and Calijah Kancey (4). The Cavaliers have allowed 26 sacks, 10th in the league, and would have far more if not for QB Brennan Armstrong's ability to escape pressure, tuck the ball and run. He leads Virginia with 417 rushing yards and six TDs despite having lost 170 yards on other carries.

Pitt: QB Kedon Slovis has been a bit of an enigma in his first season with Pitt after transferring from USC. He hasn’t thrown a touchdown since an Oct. 1 upset loss to Georgia Tech. Coach Pat Narduzzi remains confident in Slovis, who has another year of eligibility remaining. Pitt’s run game has been almost the entirety of the offense for much of conference play. For the Panthers to make a late-season surge, Slovis needs to be a difference maker and not a game manager.

Virginia: LB Nick Jackson, who is second in the ACC with 93 tackles, leads the defense and becomes more important with ACC rushing leader Israel Abanikanda taking handoffs for the Panthers. Defenses always seem intent first on stopping the run, and getting Pitt and Slovis to need to throw would activate the Cavaliers' very effective pass rush.

Pitt expects to have Abanikanda back after he missed last week with an undisclosed injury. The Panther running game did just fine in Abanikanda’s absence, with Rodney Hammond running for a career-best 124 yards and a touchdown. ... Narduzzi has 58 victories with the Panthers, two shy of Pop Warner for second on the school’s all-time list. ... Pitt is 7-2 in its last nine road games dating to 2020. ... Armstrong has thrown for six TDs, the same number he's run for in nine games.