Purdue to face reeling UConn and its new coach, quarterback 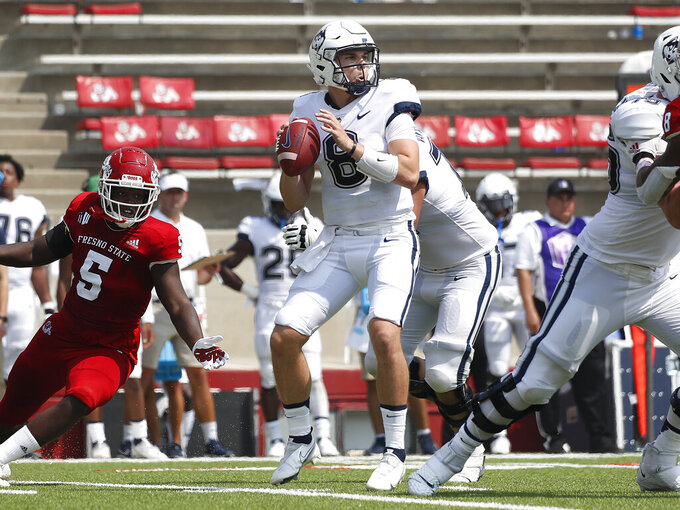 Connecticut quaterback Steven Krajewski looks for a receiver during the second half of the team's NCAA college football game against Fresno State in Fresno, Calif., Saturday, Aug. 28, 2021. (AP Photo/Gary Kazanjian)

Brohm's team is coming off a season-opening win over Oregon State in which quarterback Jack Plummer threw for 313 yards and two touchdowns. It opened this week as a 33 1/2-point favorite over the Huskies, according to FanDuel Sportsbook.

UConn has started the season 0-2, including a 10-point loss last week to Holy Cross from the FCS. That led the Huskies to part ways with coach Randy Edsall, replacing him on an interim basis with defensive coordinator Lou Spanos.

But Brohm is trying to make sure his team understands that results — not predictions — are what matter most. And he doesn’t want anybody inside the program thinking that the situation at UConn means an easy road win.

“We’ve had numerous opponents come into our stadium here that probably on paper should have won through the course of myself being here, and we’ve found a way to win because our players were hungry and they wanted to prove themselves,” he said. "I guarantee you, UConn will be ready to prove themselves this week.

Here are some things to watch for on Saturday:

Spanos gets his first shot as a head coach after 26 years coaching in college and the NFL.

He's also had jobs in the NFL at Washington and Pittsburgh.

The interim coach said his team has responded well to the coaching change.

“We had our team meeting and talked about what we want to do for the upcoming opponent, Purdue,” Spanos said. “We addressed several issues, but the most important thing is we’re going to work hard, and while working hard we’re going to enjoy this moment and have fun.”

The Huskies, in addition to changing coaches, also have a new starting quarterback this week.

Steven Krajewski takes over from Jack Zergiotis, who started the first two games of the season, completing just 29 of his 65 passes for 235 yards, three touchdowns and three interceptions.

Krajewski played in four games for the Huskies in 2019, completing 24 of his 38 attempts for 292 yards, three touchdowns and two interceptions.

He also played in the fourth quarter of the Huskies’ season-opening 45-0 blowout loss to Fresno State, completing 2 of 6 passes for 11 yards.

UConn went just 6-32 in Edsall's second stint as head coach and only three of those wins came against bowl subdivision opponents. The Huskies beat Temple and Tulsa in 2017 and UMass in 2019. The Huskies have never faced Purdue and haven't beaten a Big Ten opponent since a 14-7 win at Indiana in September 2006.

Brohm promised he would become more involved with Purdue's defense after two straight losing seasons and a third coordinator change.

So far, he likes the results. Purdue gave up 78 yards rushing against Oregon State, picked off one pass and forced a quarterback change. But two players — all-Big Ten defensive end George Karlaftis and linebacker Jalen Graham — stood out.

Graham had six tackles, one sack, forced a fumble and had three pass breakups. Karlaftis finished with four tackles, and Brohm knows they need to keep playing that way.

“While George didn’t maybe get the statistical production, he was in the backfield all day long,” Brohm said. “Jalen showed up, made plays not only in the running game, but off the edge he was able to guard guys in man coverage with his length and athleticism. Those two guys, in order for us to win, need to play well.”