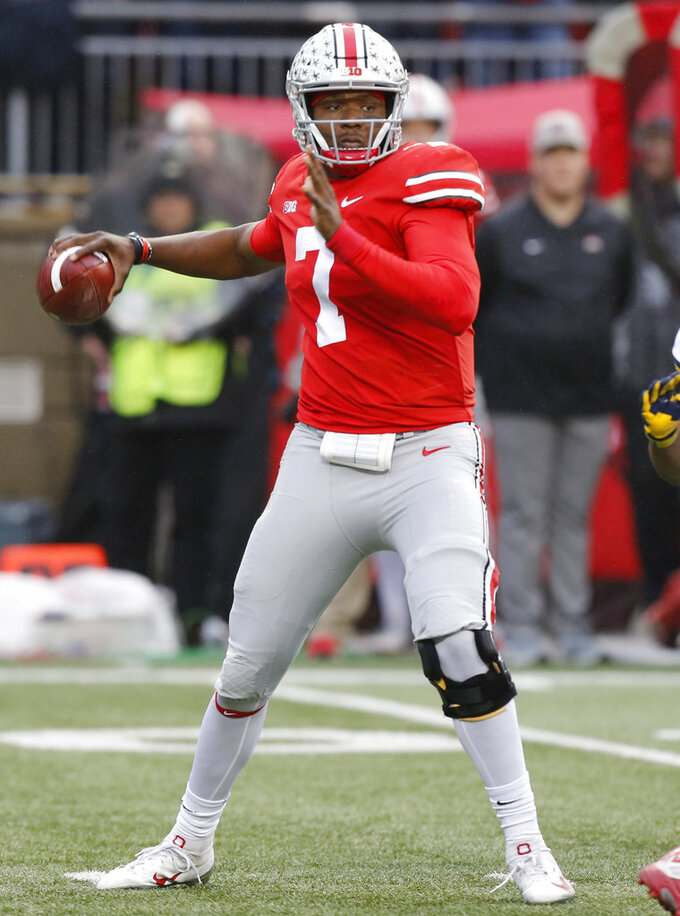 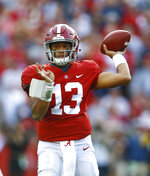 —Tua Tagovailoa, Alabama, matched a school record with five touchdown passes and ran for a score to lead the No. 1 Crimson Tide to a 52-21 victory over rival Auburn.

—Dwayne Haskins, Ohio State, threw five touchdown passes and the No. 10 Buckeyes continued their mastery over No. 4 Michigan with a record-setting 62-39 victory to reach the Big Ten championship game.

—Jake Fromm, Georgia, threw a career-best four TD passes, helping the No. 5 Bulldogs romp into the Southeastern Conference championship game with a 45-21 rout of Georgia Tech.

—Cade Carney, Wake Forest, rushed for a career-high 223 yards and the Demon Deacons closed out their regular season with a 59-7 win over Duke.

—K.J. Costello, Stanford, threw for 344 yards and career-high five TDs leading the Cardinal to a 49-42 victory over UCLA.

—Travis Homer, Miami, rushed for 168 yards and a long TD as the Hurricanes closed their regular season by knocking off No. 24 Pittsburgh 24-3.

—Reggie Gallaspy II, North Carolina State, scored his school-record-tying fifth TD on a 1-yard run in overtime in a 34-28 win over North Carolina.

After a most unusual regular season for Ohio State, it was business as usual against Michigan.

Dwayne Haskins threw five touchdown passes, freshman Chris Olave had a breakout performance and No. 10 Ohio State continued its mastery over No. 4 Michigan with a record-setting 62-39 victory that sends the Buckeyes to the Big Ten championship game.

The Wolverines were two victories away from their first conference championship since 2004 and a trip to the College Football Playoff, facing an Ohio State team that has looked discombobulated on defense and one-dimensional on offense much of the season. Looking to snap a six-game losing streak against the Buckeyes and get coach Jim Harbaugh his first victory in four tries in the rivalry known simply as The Game, the Wolverines wilted.

In the 115th meeting between two of college football's most storied schools, Ohio State scored the most points ever in regulation against Michigan.

Tua Tagovailoa came out of halftime firing touchdown strikes down the field, and the result was another runaway Alabama victory.

Tagovailoa threw five touchdown passes, ran for a score and could scarcely miss in the second half to lead the top-ranked Crimson Tide to a 52-21 victory over rival Auburn.

Tagovailoa and the Crimson Tide took over with an explosive third quarter, when the Heisman Trophy contender threw three long touchdown passes. He's the first Alabama player to have a hand in six TDs in a game and matched the school record with the five scoring passes.