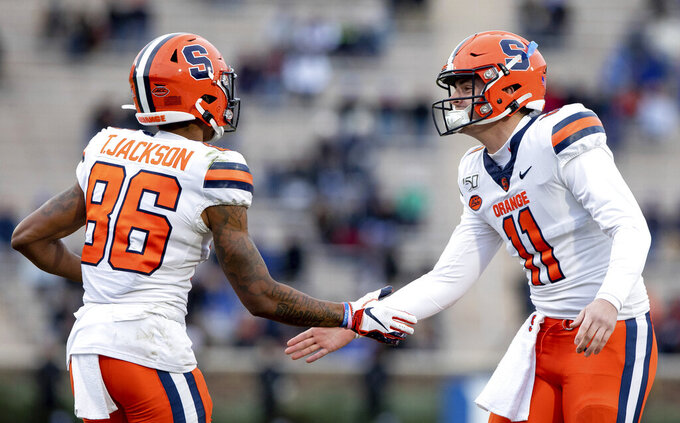 Syracuse's Clayton Welch (11) and Trishton Jackson (86) celebrate after Jackson scored a touchdown during the first half of an NCAA college football game against Duke in Durham, N.C., Saturday, Nov. 16, 2019. (AP Photo/Ben McKeown)

They only needed one win to avoid being 0-for-the-ACC — and did they ever get it.

Syracuse routed Duke 49-6 on Saturday to snap a four-game losing streak, with Tommy DeVito throwing for two touchdowns and running for another.

“It’s just one game — that’s all it is, one football game — but how important a football game it was to us was extreme based on things that have gone on the past two weeks,” coach Dino Babers said.

Andre Cisco returned an interception 48 yards for a TD to help the Orange (4-6, 1-5 Atlantic Coast Conference) earn their first win against a power-conference team. Syracuse, a 10-point underdog, pulled away by turning three second-half takeaways into touchdowns and outscored Duke 35-0 after halftime.

“I’m really excited that they have the experience of winning again,” Babers said.

Moe Neal rushed for 115 yards and a 2-yard score, Jarveon Howard also finished with 115 yards rushing with a 28-yard TD and the Orange had a season-best 286 yards on the ground. Syracuse had only one 100-yard rusher in its first nine games, with Neal gaining 123 in the victory over Western Michigan on Sept. 21.

“They were serious about running the football,” Babers said.

DeVito was 6 of 15 for 105 yards with an 18-yard scoring pass to Trishton Jackson and a 22-yarder to Luke Benson to go along with his 1-yard scoring run.

Perhaps more importantly for DeVito, Syracuse — which allows an FBS-worst five sacks per game — was sacked only once.

Syracuse: Everything that went wrong during the past few weeks suddenly went right for the Orange. They protected DeVito, found a way to run the ball and showed marked improvement on defense under interim coordinator Steve Stanard, who took over when Brian Ward was fired. If nothing else, this team won’t match Greg Robinson’s forgettable 2005 Big East squad — the program’s last to finish a season without a conference victory.

“Duke didn’t know what we were going to do, so that’s a huge advantage for us,” Babers said, adding that his defense was “on fire.”

Duke: The Blue Devils have been in a total free fall ever since that failed jump pass in the closing seconds at North Carolina. Duke has lost its last two by a combined 87-13 and this largely listless performance was reminiscent of a 59-7 loss to Wake Forest on Senior Day 2018. This was one the Blue Devils probably had to win to have a realistic shot at bowl eligibility. No more wiggle room: Either beat the Demon Deacons and Miami or spend the holidays at home.

Everyone else in the ACC had teed off on DeVito, with each of the Orange’s first five conference opponents finishing with at least three sacks and four of them notching at least seven. The beleaguered Syracuse offensive line kept the Blue Devils away from him. Their only sack came on the final play of the first quarter.

Syracuse took complete control of the momentum on Cisco’s double-deflected pick-six, which put the Orange up 21-6 early in the third. Quentin Harris’ pass for Jalon Calhoun was tipped into the air, bounced off Duke receiver Jake Bobo’s hands and directly to Cisco, who caught it in stride on his way to the end zone.

More hits came for Duke’s offensive line, which has already lost Jack Wohlabaugh to ankle surgery earlier in the week. Left tackle Casey Holman suffered an upper body injury in the first half. Holman laid face down and motionless for several minutes, went off the field on a stretcher and was driven from the stadium in an ambulance. Cutcliffe said X-rays showed no fractures and he had movement and feeling in his extremities.

Syracuse: Plays at Louisville on Saturday.

Duke: Visits instate rival Wake Forest on Saturday after the Demon Deacons and Blue Devils lost by a combined 101-9, with No. 3 Clemson beating Wake Forest 52-3.