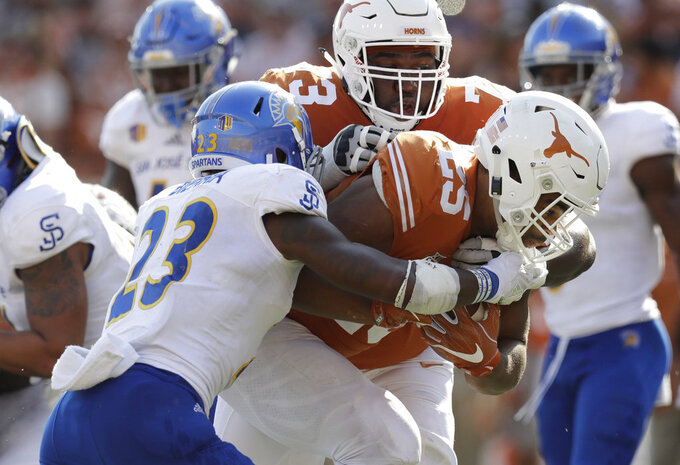 FILE - In this Sept. 9, 2017, file photo, Texas running back Chris Warren III (25) scores a touchdown past San Jose State safety Trevon Bierria (23) with the help of teammate Patrick Hudson (73) during the second half of an NCAA college football game in Austin, Texas. Hudson was taken to a hospital and treated in intensive care this week because of a heat-related illness at practice, coach Tom Herman said Thursday, Sept. 6, 2018. (AP Photo/Eric Gay, File)

AUSTIN, Texas (AP) — Texas sophomore offensive lineman Patrick Hudson was treated in intensive care and remains hospitalized because of a heat-related illness at practice this week, the school said Thursday night.
Hudson, who is 6-foot-4, 335 pounds, was being treated for "exertional heat cramps" Wednesday when medical staff noticed his body temperature rising and he was placed in a cold tub, Texas head athletic trainer Anthony Pass said in a statement.
"We immediately went into our exertional heat illness protocol, which included cold water immersion, in order to get his temperature down and to transport him to the hospital for further care. Patrick remains in the hospital and his condition continue to improve," Pass said.
A Texas spokesman, citing health privacy concerns, declined to give more details on what happened at practice before Hudson went to the hospital or on his condition. Coach Tom Herman said Hudson was no longer in intensive care.
Herman described the episode as a "full body cramp" and said Hudson was treated in intensive care at the hospital. Texas did not disclose the incident until after practice Thursday night.
"Everything's great," Herman said. "His body temperature is back to normal. All the vitals are great."
Hudson will not play Saturday night against Tulsa. Herman suggested doctors are still running tests to find out why Hudson's body temperature spiked when others didn't.
Austin temperatures hit 95 degrees Wednesday afternoon, according to the National Weather Service. Herman said the team practiced outside instead of using the indoor facility.
"It was hot yesterday, really hot and humid. I felt (practicing outside) was necessary. We had been inside quite a bit," Herman said.
"(Hudson's) body temperature rose. Our staff did a great job, dunked him in the cold tank, got his temperature dropped," Herman said. "Sent him to the hospital, and doctors there got his temperature all the way down to normal. All of the tests are to try to figure out why he got a heat illness when nobody else did."
Herman said Hudson has had cramping issues in the past.
"He's kind of a cramp guy. For a massive human being, he's not very fleshy. He's got a pretty low percentage of body fat," Herman said.
Maryland offensive lineman Jordan McNair died of heatstroke on June 13 after he was overcome by heat at practice two weeks earlier, prompting the school to place coach DJ Durkin on leave and part ways with its strength and conditioning coach. Maryland beat Texas last weekend 34-29 in the first game of the season.
___
More AP college football: https://apnews.com/tag/CollegeFootball and https://twitter.com/AP_Top25
___
Follow Jim Vertuno at https://twitter.com/jimvertuno