That's the ticket: Move from paper to digital divides fans 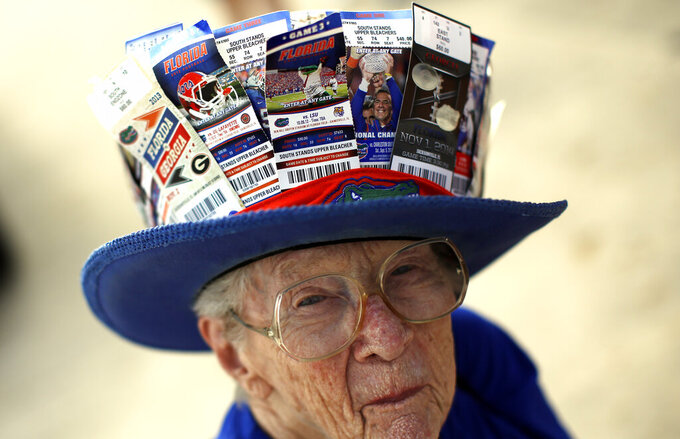 FILE - Florida fan Evelyn Stark, 86, wears a hat featuring all the ticket stubs since her first Florida-Georgia game in 1956, while tailgating with friends at an NCAA college football game between Florida and Georgia in Jacksonville, Fla., in this Saturday, Oct. 31, 2015, file photo. College football programs are transitioning from traditional paper tickets to digital ticketing. Many fans like the feel of holding a ticket in their hand and hanging on to them as keepsakes. Others welcome the convenience of having a barcode on their smartphone scanned at the gate. (AP Photo/Stephen B. Morton, File)

LINCOLN, Neb. (AP) — John Fey was rummaging through a box of old scrapbooks this summer when he came upon a couple lost treasures.

At the bottom of the box, detached from the page they were once glued to, were ticket stubs from Nebraska's 1971 “Game of the Century” win against Oklahoma and the Cornhuskers' 1984 Orange Bowl loss to Miami.

Those games are still regarded among the greatest in college football history and those stubs were proof Fey was at both.

“I had flashbacks. Big-time flashbacks,” the 68-year-old from Plattsmouth, Nebraska, said.

For people who keep them, ticket stubs can spark memories of being at a big game in person, cheering on a favorite team or, for a guy like Fey, nearly total recall of time spent with friends and family at a stadium. They are treasured mementos — and they are not going away even as schools transition to cashless transactions for everything from game tickets to food and drink.

Nearly every Football Bowl Subdivision school has gone to mobile ticketing this season, but in a spot check of 30 schools, only Notre Dame said it would refuse to print tickets for fans requesting them.

The other 29? They are willing to print, though most do not publicly offer that option. Illinois was among schools that did give fans a choice, and 74% picked paper. That figure was 64% at Nebraska and 50% at Texas A&M.

“I have to presume a college-aged kid doesn’t want anything printed ever, so a push on digital is going to be a completely different conversation than it is with an alumnus who graduated college in 1942,” Andersen said. “It takes constant communication and working through a process and talking to the fans. You get pushback when you do an all-or-nothing proposition."

Traditional tickets on cardstock began fading away in the last decade with the advent of print-at-home tickets and digital, or mobile, ticketing systems where fans have a barcode on their smartphones scanned at the gate.

Digital tickets are eco-friendly, a safeguard against stolen or counterfeit tickets, and they can be transferred online from one person to another. They also allow schools to save hundreds of thousands of dollars in mailing costs. In the pandemic, cashless transactions are more popular than ever for safety reasons.

Nebraska fan Tom Reischlein of Omaha said he has used mobile ticketing at venues with no problem but chose paper football tickets at the suggestion of his wife, who said they might want them as a souvenir if they see a memorable game.

“I think it’s a good idea that they’re kind of easing into it and giving people the choice,” said Reischlein, 58. “I’ve seen a lot of the older folks, either they don’t have a cell phone or they have trouble navigating through it when there’s a bunch of people lined up behind them.”

Another Nebraska fan, Katherine Crawford of Lincoln, said her family has owned season tickets for three generations and will go digital this year.

“We had a huge discussion," said Crawford, 27. "My grandma was very much against it, but she’s not a huge technology person so it would have been quite difficult for her. My mom and I agreed it would be a nice option to have, a convenience.”

Mark Townsend of Columbia, Maryland, a collector who runs the website TicketsFromThePast.com, said paper tickets bring about a sense of nostalgia.

Stubs from historic NFL, NBA and Major League Baseball games have the most monetary value, Townsend said, noting that a less-than-mint condition stub from Jackie Robinson's first game with the Brooklyn Dodgers recently was sold for $40,000.

Without paper tickets, he said, “You lose that piece of history and memory of where you’ve been, where grandpa’s been, or ‘Me and my dad went to the ballgame and we’ve got our ticket stub still,'" he said. "It’s more your moment in time and the pleasure that the game gave you. It ignites things in your head that makes you remember things.”

In Fey's case, his ‘71 Game of the Century stub leads him to reminisce about his surprise when his dad told him he was able to get hold of the tickets, the flight to Norman, Oklahoma, in a small private plane that needed its tires pumped before takeoff, and Johnny Rodgers’ 72-yard punt return for a touchdown that was the signature play of the Cornhuskers' 35-31 win.

“He was 10 yards in front of me when he crossed the 5-yard line,” Fey said. “I swear to God if I would have had a cell phone I would have taken a picture.”

Fey said he had stuffed the ticket stub in his pocket after he went through the turnstile, put it in his scrapbook when he got home and forgot he had it until he was going through some boxes last month.

Same with the stub from the ‘84 Orange Bowl. The husband of a woman Fey worked with had an extra ticket and asked if Fey wanted to join him and three others on a guys' trip to Miami.

Fey remembered the long van ride from Omaha to Miami, with a stop in Jacksonville to watch Iowa play Florida in the Gator Bowl, and unexpectedly bumping into his parents in a concession line at the Orange Bowl stadium.

“What are you doing here?” Fey remembered his dad asking.

Most memorable, of course, was one of the defining plays of Nebraska coach Tom Osborne's career — the late failed two-point conversion pass that left the Huskers with a 31-30 loss when an extra-point kick probably would have secured his first national championship. Fey watched the play unfold from the opposite end of the field.

In the moment, Fey said, he was inclined to throw away that ticket stub.

“But I must have thought, ‘Well, someday I might want to look back on this,'" he said. ”Now if they get blown out 48-0, that’s one thing. They were behind and it was a hell of a comeback and had that pass not been tipped, maybe he would have got it.