Thompson and K-State open with 24-7 win over Stanford 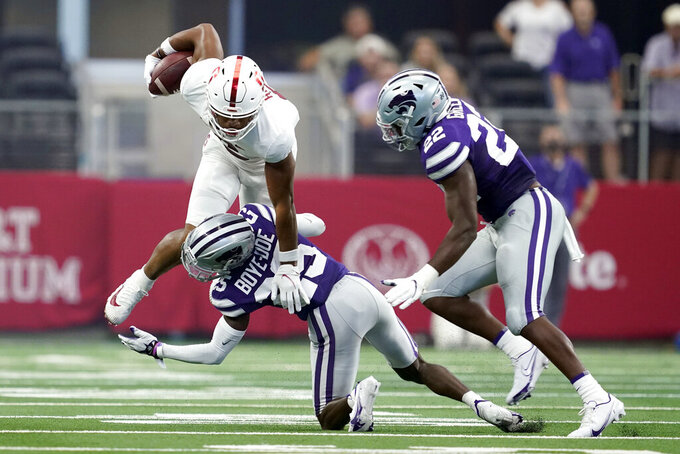 Stanford wide receiver Elijah Higgins (6) is stopped from gaining yardage after a catch as Kansas State defensive back Ekow Boye-Doe (25) and Daniel Green (22) close in during the first half of an NCAA college football game in Arlington, Texas, Saturday, Sept. 4, 2021. (AP Photo/Tony Gutierrez)

ARLINGTON, Texas (AP) — Skylar Thompson set the tone for Kansas State when the quarterback put his left shoulder down and bulled into the end zone for the first of his two touchdown runs as the Wildcats opened the season with a 24-7 win over Stanford on Saturday.

Thompson, who later had a 13-yard TD run, opened the scoring when he knocked cornerback Kyu Blu Kelly to the ground on a 6-yard TD run in the first quarter.

“There’s a lot that went into that touchdown, a lot that people didn't see, and a lot of time spent on my own,” Thompson said. “In the midst of a situation that once seemed very dark and stormy, to see the fruit fall from the tree, to see the sun shine a little bit and to take a deep breath ... It all worked out and everything happened for a reason."

Thompson missed most of last season after he injured his throwing (right) shoulder in the third game. But he returned for his sixth year in the K-State program because of his love of the game and the desire for a better finish, taking advantage of the extra season of eligibility received amid the pandemic.

Deuce Vaughn sprinted 59 yards for a touchdown on and a third-and-13 play. He finished with 124 yards rushing on 13 carries for the Wildcats, who finished last season with a five-game losing streak, and is glad to have back Thompson, who he described as fantastic and smart player.

Stanford was down 24-0 before Tanner McKee's 14-yard touchdown pass to Brycen Tremayne with 3:16 left on its last offensive snap. The Cardinal, who last year won the last four games of their pandemic-shortened 4-2 season, have played 177 games since last being shut out, a 42-0 loss to Southern Cal on Nov. 4, 2006.

“This game was not indicative of how hard we've played, how hard we’ve practiced and how well we practiced,” David Shaw said after his 11th opener at Stanford's coach. “Disappointing to me that we didn't go out there and execute better."

On the possession before Thompson's first TD, Kelly had an impressive interceptio n in the end zone, leaping and reaching back over Phillip Brooks and then managing to get one foot down inbounds. But Stanford went three-and-out, setting up the two-play TD drive. Thompson found a wide-open Brooks for a 56-yard pass to the 6.

Thompson, who finished 9-of-14 passing for 144 yards and ran 10 times for 33 yards, didn't initially realize that it was Kelly he ran through on his first touchdown..

“Everything happened so fast,” Thompson said. “I didn't even realize it until after the fact, and I kind of smiled about it a little bit.”

NOT A LOT OF PLAYS

There were only 97 offensive snaps in the game — 52 for Stanford and 45 for Kansas State.

“It's kind of refreshing as a defensive coach to see that,” K-State head coach Chris Klieman said.

Stanford: With quarterback Davis Mills now in the NFL, Stanford used both 6-foot-6 sophomore McKee and senior Jack West. McKee finished 15-of-18 passing for 118 yards. West started was 8 of 12 for 76 yards with two interceptions, one pick coming right after completions of 27 and 15 yards. The Cardinal finished with only 233 total yards.

“We can make plays with both quarterbacks, we’ve been doing that in camp,” Tremayne said.

“Some good, some bad for both," Shaw said. "Both guys throughout training camp practiced extremely well.”

Kansas State: The opener was a boost for the Wildcats defense after allowing at least 32 points six times last year, including 45 and 69 points in games over the last month of the season. Klieman was encouraged by the three-man defensive fronts his team has been working on for the past eight months.

IN AN NFL STADIUM

The game was initially supposed to be played in Manhattan, but Kansas State agreed to move it to the home of the NFL's Dallas Cowboys. The announced crowd for the kickoff classic at AT&T Stadium was 28,668, well below the listed capacity of 80,000.

Stanford: The Cardinal will be back in their home state of California, but will play their sixth consecutive road game dating back to last season, at Southern Cal on Saturday.

Kansas State: The Wildcats will be back in Kansas to play at home against FCS team Southern Illinois next Saturday.