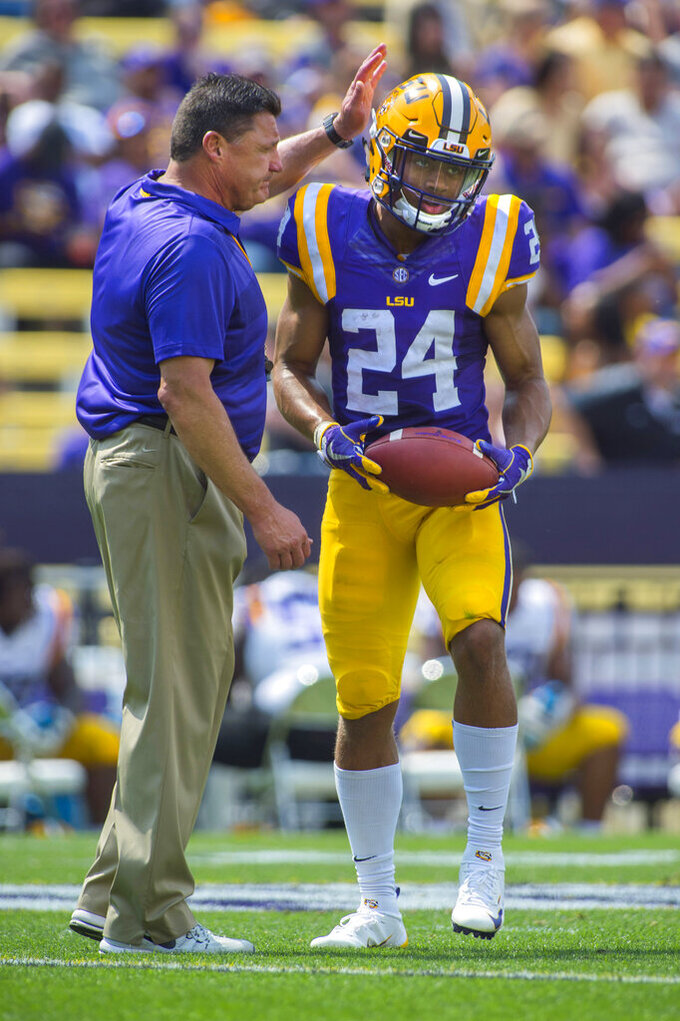 BATON ROUGE, La. (AP) — As LSU freshman cornerback Derek Stingley Jr. ran in stride with receiver Terrace Marshall Jr., he twisted his torso toward the middle of the field and raised his hands to snatch Joe Burrow's deep pass, reminding the starting quarterback of the risk that comes with challenging the Tigers' highest-profile recruit.

Stingley's interception during LSU's spring game on Saturday highlighted a performance that left little doubt about his potential to build upon the "DBU" legacy in which LSU takes pride.

"The thing he does really well is he always plays the ball, so you can never just throw up 50-50 balls like I did today," Burrow said. "I tried to get him once. He got me."

The 6-foot-1, 195-pound Stingley hasn't won a starting cornerback job yet, but likely will compete for it in August. He also has emerged during spring practice as the clear No. 1 punt returner.

In the spring game, LSU did not practice 11-on-11 punt coverage. Stingley fielded punts with only one player running toward him and there were no attempts at a return. Still, Stingley had to decide which punts field or let bounce. He appeared to make the right decision each time and did not mishandle any he decided to catch, even racing forward once to snag a short, wobbly punt.

"He's going to be an excellent player and you see him returning punts for us," LSU coach Ed Orgeron said. "He's going to make a difference there."

For much of the game, Stingley blanketed receivers to which he was assigned. Burrow threw in his direction just a handful of times, completing only one pass against him on Marshall's comeback route.

Orgeron said Stingley's' standout performance was "what we saw all spring. The guy came in and was phenomenal."

"He has great ball skills, great awareness," Orgeron added. "The guy's a phenomenal athlete, but he still has some things to get better at."

LSU generally denies interview requests for freshmen until they have undergone formal interview training, and Stingley did not speak with reporters after the spring game.

His last name should sound familiar to long-time football fans. His grandfather was the late Darryl Stingley, a former New England Patriots receiver who was paralyzed during a 1978 preseason game when he was hit by the Raiders' Jack Tatum.

Derek Stingley Jr. was raised in Louisiana, his mother's native state. Playing for Dunham High School in Baton Rouge, he intercepted 14 passes during his final 20 games. He was voted the Gatorade high school player of the year in Louisiana in 2018 and was the consensus top-rated overall college prospect in the state when he signed with LSU as an early enrollee last December.

His father is an assistant coach at Dunham High School, and Orgeron describes the younger Stingley's knowledge of the game as advanced for his age and experience.

Orgeron and Burrow also describe Stingley's physical presence on the field as atypical of a freshman.

"He's very physically advanced for his age," Burrow said. "I don't want to build him up too much because I don't want him to get a big head, but he's going to be a really good player for us."