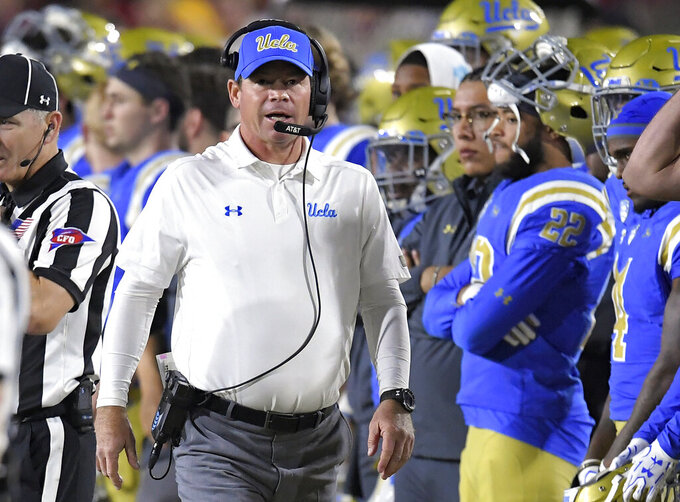 FILE - UCLA head coach Jim Mora walks the sideline during the first half of an NCAA college football game against Southern California, Saturday, Nov. 18, 2017, in Los Angeles. On Thursday, Nov. 11, 2021, UConn hired former UCLA coach Jim Mora, who also coached two NFL teams, to lead the Huskies. Mora has been out of coaching and has been working as a television analyst after spending six seasons (2012-17) leading UCLA to a 46-30 record.(AP Photo/Mark J. Terrill, File)

The 59-year-old Mora has been out of coaching and working as a television analyst after spending six seasons (2012-17) leading UCLA to a 46-30 record.

“Jim is a proven winner, a man of integrity and he possesses the experience and energy to lead our football program back to success,” UConn athletic director David Benedict said in a statement.

Mora coached four seasons in the NFL, three with the Atlanta Falcons and one with the Seattle Seahawks, going 31-33. He was also a defensive coordinator with the San Francisco 49ers for five years before taking over the Falcons.

UConn has been searching for a head coach since Randy Edsall stepped down in September.

Mora and UConn agreed to a five-year deal that runs through the 2026 season, with a first-year salary of $1.5 million, according to the school's announcement.

He will be added to the UConn staff immediately as an assistant coach, allowing him the ability to do some coaching in practice with the current players and, most importantly, to have full privileges in recruiting.

“This program is loaded with potential, and I look forward to getting to know the student-athletes on the team and am eager to get to work,” Mora said in a statement.

Mora's father, also named Jim, was a head coach in the NFL with the New Orleans Saints and Indianapolis Colts.

The Huskies are 1-8 in the their first season playing as an independent in football. After starting the season 0-2, Edsall, who was in his second stint leading the program, announced he would retire after this season.

A day later, it was announced Edsall would step down immediately and Lou Spanos took over as interim coach.

The Huskies football program has not had a winning season since 2010, reaching just one bowl game. The collapse of Big East football left UConn as a member of the American Athletic Conference and the football program was never able to find its footing in the AAC.

UConn made the decision to leave the AAC and return to the basketball-centric Big East in 2020, turning the football program into one of the few FBS independents.

Last year would have been UConn's first season as an independent, but with the program in transition, the school canceled the season because of the coronavirus pandemic.

The Huskies' only victory this season has come against Yale from the Ivy League. UConn plays at Clemson this Saturday.