Virginia Tech, Maryland vie in Pinstripe Bowl, both at 6-6 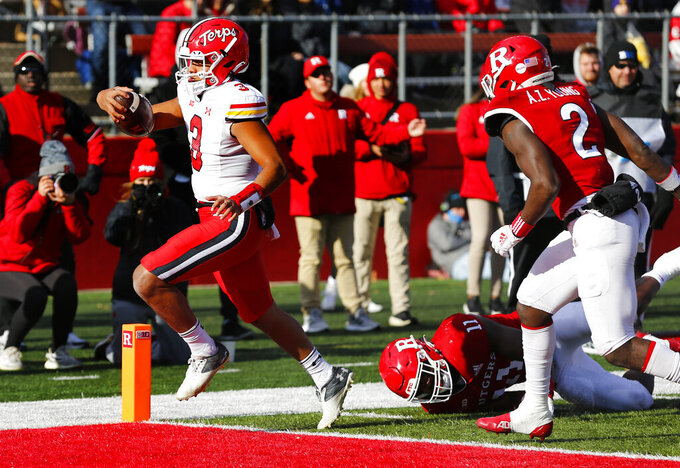 FILE - Maryland quarterback Taulia Tagovailoa (3) scores a touchdown against Rutgers during the first half of an NCAA football game, Saturday, Nov. 27, 2021, in Piscataway, N.J. Virginia Tech and Maryland each have six wins and are trying for a winning record when they meet Wednesday, Dec. 29, at Yankee Stadium in the Pinstripe Bowl. Tagovailoa, an Alabama transfer, threw for 3,595 yards and 24 touchdowns this season, with 11 interceptions. (AP Photo/Noah K. Murray, File) 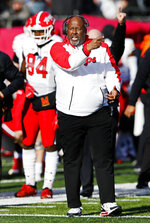 Virginia Tech and Maryland have a tie to break in the Pinstripe Bowl.

Both teams are 6-6 and the one that walks off the field Wednesday at Yankee Stadium with the victory will end with a winning record -- and a bit of a fresh start headed into 2022.

“We haven’t had a winning season around here in a long time, and the fact that we’re having an opportunity to play a meaningful game in December with that on the line, a chance to have a winning season, to me shows that the progress is being made with our program,” Maryland coach Michael Locksley said.

Locksley can appreciate the opportunity as much as any other coach: He won only six games combined at Maryland in two-plus seasons heading into this year.

“By no means is 6-6 the landmark that we want to have,” Locksley said. “But to be able to take this step in year three by becoming a bowl-eligible team is invaluable.”

Maryland is trying for a winning record for the first time since it went 7-6 in 2014. The Terps haven’t won a bowl game since 2010.

Virginia Tech is trying to send off interim coach J.C. Price with a victory before he yields to former Penn State defensive coordinator Brent Pry. Price, who will stay on as an associate head coach and defensive coach, replaced Justin Fuente in November and led the Hokies to a bowl game with a five-point win over Virginia in the season finale.

The vendors at baseball games used to cry that fans can’t tell the players without a scorecard, and perhaps it’s appropriate to find one for Virginia Tech at Yankees Stadium.

Hokies -- make it, ex-Hokies -- used Twitter over the last month as a transaction wire to announce they would leave the program. Quarterbacks, wide receivers, defensive lineman, defensive ends, all bolting for the transfer portal or declaring for the NFL draft. It will lead to a bit of a makeshift lineup in the Pinstripe Bowl. Junior Texas A&M transfer quarterback Connor Blumrick gets the start.

“I wouldn’t say that we’ve had any more opt-outs than anybody else in the country," Price said. “I think that’s just the nature of college sports right now.

The Hokies have a special bond with the Yankees following the April 16, 2007 shooting on the Virginia Tech campus that left 32 dead. The Yankees made a $1 million donation to the Hokie Spirit Memorial Fund and followed up the next season with an exhibition game against Virginia Tech on the Blacksburg campus. The Yankees wore caps in the Hokies’ orange and maroon, their `NY’ emblem on the front and a `VT’ logo on the side.

“One day the Boss called me and said, ‘Turn on the television,’ and there was a horrific tragedy at Virginia Tech, and the Boss said, ‘We’ve got to help,’ " Yankees President Randy Levine said.

Derek Jeter and Alex Rodriguez were among the Yankees that made the trip and more than 200 people were waiting as the team bus made its first stop at the memorial.

“They hated why they were there because it was a horrible tragedy, but they just felt that if they could provide some comfort to all the hurting folks at Virginia Tech, it was well worth doing,” Levine said.

The winner of the Pinstripe Bowl receives the George M. Steinbrenner Trophy.

Maryland QB Taulia Tagovailoa set school single-season records with 308 completions and 3,595 yards passing. He has completed 68% of his attempts for 24 touchdowns. The Alabama transfer earned all-Big Ten honorable mention honors and finished second in the conference in passing. After setting the school’s single-season passing record, Tagovailoa said he would return next season.

“What we’ve found is, we’ll go as far as Taulia will take us,” Locksley said. “I really like the way he has developed for us throughout this season. Really, 16 games into a career and being able to rewrite some of our record books with a record-breaking year this year, and then to have a chance to continue to build on it playing in this bowl game, it’s been great.”

The Hokies’ signature “Enter Sandman” song rings out through Lane Stadium for an entrance long considered among the best in college football.

It should be easy enough for the Yankees to hit play.

The Metallica smash was also the theme song for Hall of Fame reliever Mariano Rivera when he closed out games at Yankee Stadium.

Price said he hoped the song would get its due Wednesday for both the Hokies and the Yankees.

“I can’t tell you 100% with certainty, but I think every bowl game I’ve ever been to, both teams do their own entrance, so I would think that would be played,” he said.