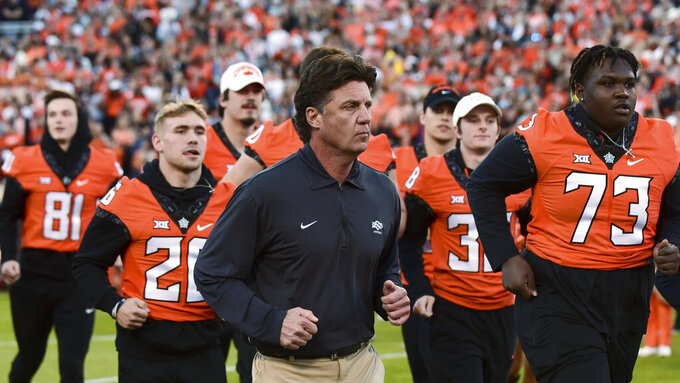 No rivalry has produced more big games than Michigan-Ohio State.

The Wolverines and Buckeyes get together Saturday for their annual Big Ten grudge match and it will the 24th time both are ranked in the top 10 of the AP poll at kickoff.

That's seven more than the next closest rivalries (Notre Dame-USC and Nebraska-Oklahoma). Among the rivalry games in the spotlight over Thanksgiving weekend, Alabama-Auburn has had eight top-10 matchups in its history and Oklahoma-Oklahoma State has just two. The 10th-ranked Sooners and No. 7 Cowboys will make it three Saturday in Stillwater.

Of the all the rivalry games being played this weekend, the one with the second-most top-10 matchups is Florida-Florida State with 14. The Gators and Seminoles are decidedly unranked this season.

Still, it's a rivalry so interest abounds, as it will across the country over three days when you can gorge on college football.

Bedlam makes a strong case, but Buckeyes-Wolverines gets the slight nod because of the greater likelihood of offensive fireworks.

Ohio State possesses the best offense in the country, fueled by a Heisman Trophy contender at quarterback.

C.J. Stroud has thrown 36 touchdown passes and completed 71.1% of his passes, guiding an offense that averages almost 8 yards per play.

The Wolverines have two of the nation's best pass rushers in Aidan Hutchinson and David Ajabo (combined 20 sacks), but the real counter for Michigan is its powerful running game.

The winner takes the Big Ten East, a spot in the conference title game and will be a step away from the College Football Playoff.

And then there is the already-baked-in intrigue of The Game: Ohio State has won eight straight, including all five since Jim Harbaugh has become Michigan coach.

The Heisman race clarified last week with Stroud and No. 3 Alabama's Bryce Young taking the role of favorites, but Young's teammate deserves attention.

Anderson has been the most consistently dominant player in the country this season, with 26.5 tackles for loss, including 13.5 sacks. The NCAA record for tackles for loss in a season is 32 by George Selvie of USF in 2007.

In the Iron Bowl, Anderson has a chance to feast on an Auburn offense that has gotten out of sorts with a backup quarterback during a three-game losing streak.

2-14 — Oklahoma State coach Mike Gundy's record against Oklahoma. Among high-profile rivalries, Bedlam is one of the most historically lopsided (90-18-7) because Oklahoma State spent much of its existence closer to Kansas than the superpower with which it shares a state. The Cowboys have closed the gap under Gundy but still rarely beat the Sooners. This year, they are the favorites.

4 — Cincinnati's ranking in the College Football Playoff Top 25. The Bearcats are positioned to become the first team from outside the Power Five conferences to reach the playoff, if they can win out. They play at East Carolina on Friday.

6 — Number of consecutive years Clemson has played in (and won) the Atlantic Coast Conference title game. That streak is not quite dead yet for a Tigers team that had three losses before November. Clemson plays in-state SEC rival South Carolina on Saturday, but if No. 21 Wake Forest loses at Boston College and No. 23 North Carolina State losses to North Carolina, Clemson wins the ACC Atlantic.

51.82 — San Diego State punter Matt Araiza's average per punt, which is on pace to break the FBS record. The 22nd-ranked Aztecs play Boise State on Friday at 9 a.m. PST with major Mountain West Conference championship implications on both sides.

2014 — The last time Rutgers played in a bowl game. The Scarlet Knights play at Maryland on Saturday and the winner gets bowl eligible. The Terps last reached the postseason in 2016.

Old Dominion was one of two FBS schools that decided not to play at all last season because of the pandemic.

The Monarchs returned this season with a “new” coach in former Penn State assistant Ricky Rahne, who was hired in 2019.

After a 1-6 start to 2021, ODU has ripped off four straight victories and needs one more to become bowl eligible.

Off the field, ODU picked up an invitation to escape Conference USA and join the Sun Belt. Been a good few months for the Monarchs.

It is doubtful any coach is going to save or lose his job based on this weekend's results, but it certainly looks as if the end of an era is coming at Duke.

The 67-year-old Cutcliffe has had remarkable success (six bowl games and an ACC championship game appearance) in 14 seasons at a program that has rarely climbed out of the bottom of the ACC over the last 50 years. But the Blue Devils are 3-8 heading into their against Miami and the slippage over the past three seasons suggests it is time for a change in Durham.