Why not us?: Ohio State's Day wants answers from Big Ten 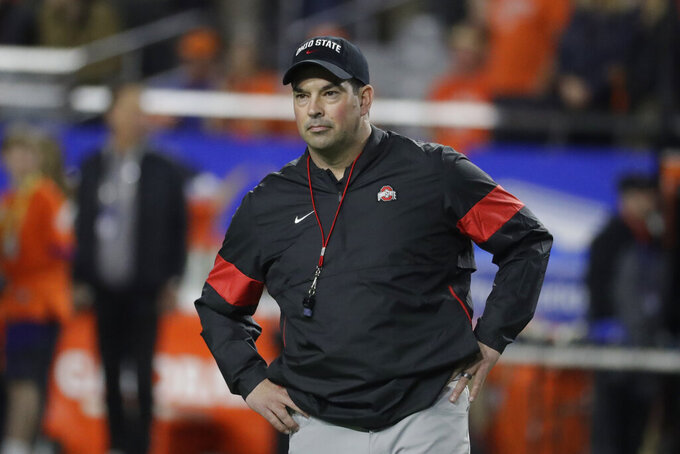 FILE - In this Saturday, Dec. 28, 2019 file photo, Ohio State head coach Ryan Day watches from the sidelines during the first half of the Fiesta Bowl NCAA college football game against Clemson, in Glendale, Ariz. Clemson is preseason No. 1 in The Associated Press Top 25, Monday, Aug. 24, 2020, a poll featuring nine Big Ten and Pac-12 teams that gives a glimpse at what’s already been taken from an uncertain college football fall by the pandemic. Ohio State was a close No. 2. (AP Photo/Rick Scuteri, File)

COLUMBUS, Ohio (AP) — Ohio State coach Ryan Day is pushing the Big Ten for answers about when the conference plans to play a football season.

In a statement released by the school on Thursday, Day said he and his players and their families want some details about if and when the conference plans to start a season that was postponed a month ago because of concerns about playing through the pandemic.

Day said he understands the conference’s decision to postpone the season because of the coronavirus pandemic, but “the communication of information from the Big Ten following the decision has been disappointing and often unclear.”

“The Big Ten medical subcommittee has done an excellent job of creating a safe pathway toward returning to play in mid-October,” Day said. “These young men and their parents have asked so many questions that I do not have an answer to, but the one that hurts the most is ‘Why can these other teams and players play and we can’t?’”

The Big 12 and Atlantic Coast Conference are starting their seasons this week, including No. 1 Clemson at Wake Forest, No. 5 Oklahoma hosting Missouri State and No. 10 Notre Dame at home against Duke.

Ohio State was No. 2 in the preseason AP Top 25 and considered a national title contender behind star quarterback Justin Fields. But if the Buckeyes and the Big Ten don't start their season until late November, which has been discussed by the league's athletic directors and coaches, it's unlikely they would be able to compete in the College Football Playoff. The semifinals are scheduled for Jan. 1 and the national title game is set for Jan. 11.

“I think the big challenge as the head football coach is that your players and your parents think that you have all the answers to what’s going on, but the reality is, we’re dependent on the Big Ten to drive this thing forward. It’s been challenging. It truly has," Franklin said on Keyshawn, Zubin and JWill. “To be able to stand up in front of your team and parents and tell them that the season is canceled/postponed, but not have any answers as to how that affects their future and when we will be playing football and still haven’t a month later. That’s the hard part.”

The Big Ten announced on Aug. 11 it was postponing its fall football season. The Pac-12 soon followed suit, but six other major college football conferences, including the powerhouse Southeastern Conference, have forged ahead, although some season openers have been postponed because of COVID-19 outbreaks.

The Big Ten and first-year commissioner Kevin Warren have faced push back and criticism ever since, including a lawsuit filed by eight Nebraska players who want the decision overturned.

The Big Ten’s decision and the subsequent backlash have trickled into politics in this election year, with Democrats and Republicans pointing fingers over who is responsible for taking away college football in the Midwest.

On Wednesday, Ohio Attorney General Dave Yost told The Associated Press if the football season isn't played he plans to sue the Big Ten on behalf of Ohio State, claiming that the decision made in response to the pandemic wrongly interferes with the university’s business relationships and amounts to a breach of contract.

Ohio State and other schools already are suffering financially because of the decision.

The University of Minnesota announced this week that because of a projected loss of $75 million, the school would have to drop men’s indoor track and field, men’s outdoor track and field and men’s gymnastics after their 2020-21 seasons.