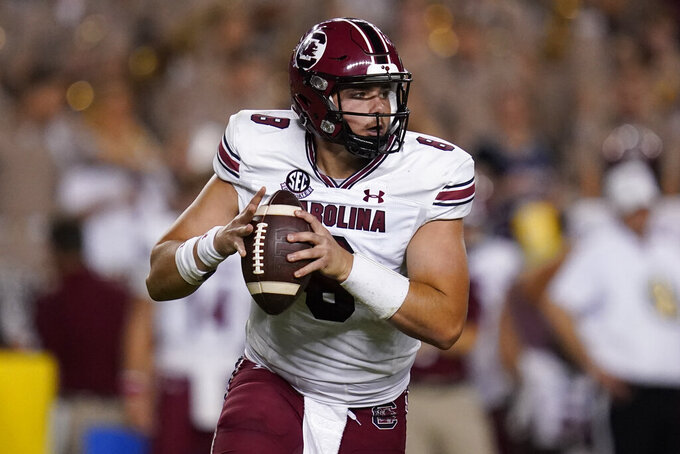 South Carolina quarterback Zeb Noland (8) rolls out to pass against Texas A&M during the first half of an NCAA college football game on Saturday, Oct. 23, 2021, in College Station, Texas. (AP Photo/Sam Craft) 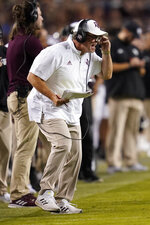 Then he made sure the Aggies did just that.

Smith had a 95-yard punt return for a touchdown and Jalen Wydermyer added two TD catches as No. 17 Texas A&M built a huge first-half lead and coasted to a 44-14 rout of South Carolina.

“My message to the team was... let’s start strong and go out here and get an edge on them real quick," Smith said. “And it just so happened that my opportunity came and I was actually going to be that guy."

The star rushing duo of Isaiah Spiller and Devone Achane continued to do damage for the Aggies. They combined for 256 yards and two touchdowns a week after rushing for 292 yards and three touchdowns.

“That’s what a dominant SEC football team looks like and they played like it,” South Carolina coach Shane Beamer said.

It was the third straight victory for Texas A&M, which knocked off top-ranked Alabama two weeks ago before beating Missouri last week.

“To lose two games like that and come back against the stretch we had, I’m very proud of them," coach Jimbo Fisher said.

Zach Calzada had 187 yards passing with two touchdowns for the Aggies.

South Carolina graduate assistant-turned-quarterback Zeb Noland had a tough night before he was benched for Jason Brown early in the fourth quarter. Noland managed just 30 yards passing and had a snap fly over his head that the Aggies recovered and turned into a touchdown in the second quarter.

“I think he had a bloody everything in that game," Beamer said. “He’s tough, he’s a fighter and he got hit a few times tonight, but he kept sitting in there and battling.”

Noland started the first three games but was hurt Sept. 18 against Georgia and didn’t play again until leading a game-winning drive in the last minute against Vanderbilt last Saturday. Luke Doty was injured against the Commodores and is out for the season after having foot surgery this week.

Brown led the Gamecocks (4-4, 1-4) on two touchdown drives after replacing Noland, but also threw an interception in the end zone.

Jaylan Foster grabbed his NCAA-leading fifth interception with about eight minutes left in the first, but the Gamecocks couldn’t move the ball after the turnover and had to punt.

The Aggies extended the lead to 14-0 when Wydermyer grabbed a 25-yard touchdown reception on their next possession.

Wydermyer made it 21-0 when he grabbed a short pass and barreled through several defenders for a 28-yard score with about 10 ½ minutes left in the first half.

“I’d like to see us put up more points and I feel like we did a really good job of doing that today,” Wydermyer said.

He had 75 yards receiving to give him 1,306 in his career, passing Martellus Bennett (1,246) for most by a tight end in school history.

“He’s really getting to playing like he’s capable of playing," Fisher said. “He’s a weapon."

It looked like Noland had his coaching hat back on three plays after Wydermyer’s second TD when he was so preoccupied yelling and gesturing at his teammates to get set that he didn’t realize the ball had been snapped and it sailed over his head.

The ball rolled all the way to the South Carolina 6 — a loss of 19 yards — before Aaron Hansford pounced on it to give A&M the ball. The Aggies cashed in on the mistake three plays later on a 1-yard TD run by Spiller that made it 28-0.

Texas A&M was dominant from beginning to end in this one, continuing its strong recent play. The Gamecocks got their first SEC win last week and will have plenty to fix during their upcoming week off if they hope to get another one this season.

The Aggies should keep their spot or could possibly move up a couple of slots after several teams ahead of them lost Saturday.

Wydermyer's brother Tyrese Wydermyer, who is in the Navy, surprised the tight end at the game. His parents kept it a secret that he was coming after the brothers hadn't seen each other in eight months with Tyrese stationed in Illinois.

“That was the happiest I've been in a while," Jalen said.

South Carolina: The Gamecocks are off next Saturday before they host Florida Nov. 6

Texas A&M: The Aggies also are off next Saturday before hosting No. 19 Auburn Nov. 6.