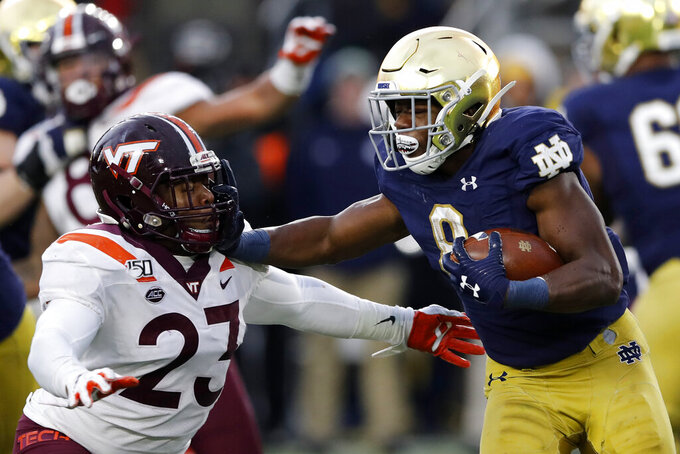 FILE - In this Nov. 2, 2019, file photo, Notre Dame running back Jafar Armstrong (8) stiff arms Virginia Tech linebacker Rayshard Ashby (23) during the second half of an NCAA college football game in South Bend, Ind. The Atlantic Coast Conference and Notre Dame are considering whether the Fighting Irish will give up their treasured football independence for the 2020 season play as a member of the league. (AP Photo/Carlos Osorio, File)

The Atlantic Coast Conference reworked its football schedule Wednesday to allow each team to play 11 games and to incorporate Notre Dame, which is giving up its cherished independence in a year turned upside down by the coronavirus pandemic.

The ACC’s university presidents approved plans for a schedule with 10 conference games and one nonconference, and for pushing back both the first week of the season (from Labor Day weekend to the weekend of Sept. 12) and the league championship game (from Dec. 5 to either Dec. 12 or 19).

Miami athletic director Blake James called the schedule “aspirational” as concerns about COVID-19 have put major college football in the fall in peril. For now, though, conferences are working on plans to play what would be a most unusual season.

The ACC will eliminate its traditional divisional format this season and the two teams with the best winning percentages in conference play will meet in Charlotte, North Carolina, for the league championship game. Maybe a Clemson-Notre Dame rematch? The league will release specific dates and broadcast plans later.

Notre Dame, which competes in the ACC in all sports except football and hockey, will play in a football conference for the first time in the 133-year history of the proudly independent program — if the season is played. The biggest conferences are taking steps to try to mitigate potential disruptions and salvage a sport worth billions in broadcast rights deals.

“We recognize that we may need to be nimble and make adjustments in the future," ACC Commissioner John Swofford said in a statement.

Notre Dame already had a scheduling agreement with the ACC that puts five or six games with the league on the Fighting Irish schedule every year. They had six this season: Clemson, Duke, Wake Forest, Georgia Tech, Louisville and Pitt. Added to that will be home games against Florida State and Syracuse and road games against North Carolina and Boston College. There will be no renewal of the Notre Dame-Miami rivalry.

The ACC and Notre Dame also agreed to equally share TV revenue — including the Fighting Irish’s deal with NBC — among the 15 schools.

It is a one-year deal for the Fighting Irish and James said he didn’t expect it to go beyond that.

“I don’t know (if) this could lead to Notre Dame being a full member in football,” James said on a conference call with reporters. “Would I like to see Notre Dame as a member of the ACC on a full-time basis? Yeah, I think that’d be great. They’re a great football program. A great institution that fits well with the ACC, but recognize they need to do what’s best for Notre Dame. This year what was best is for them to join the ACC and we’re glad to have them as part of the league.”

Notre Dame had already lost three games against Big Ten and Pac-12 opponents when those conferences decided to play only league games. The Big 12 and Southeastern Conference have not announced any changes to their football schedules, but are expected to in the coming days.

The ACC said nonconference games must be played in the ACC school’s home state — a move intended to save traditional rivalries such as Georgia-Georgia Tech, Florida State-Florida, Clemson-South Carolina and Kentucky-Louisville.

Whether the SEC’s plans include nonconference games remains to be seen.

The ACC's decision appears to rule out three early-season games in Atlanta at Mercedes-Benz Stadium: North Carolina against Auburn; Virginia against Georgia; and Florida State against West Virginia.

"We certainly understand the ACC is doing what they feel is in the best interest of the conference and the health of their teams, staff and student-athletes, and as our partners, we support them in that decision," said Gary Stokan, chief executive officer and president of Peach Bowl, Inc. “However, we are disappointed we will lose the opportunity to host Florida State, Virginia and North Carolina and their fans in our scheduled Chick-fil-A Kickoff Games this season.”

Also in danger is Notre Dame's game against Navy. The Fighting Irish and Midshipmen were originally scheduled to play the 94th consecutive meeting of their rivalry in Dublin, Ireland. The pandemic forced a relocation to Navy's home stadium in Annapolis, Maryland. It is scheduled to be the first game in the history of the series played at Navy's home field.

Navy athletic director Chet Gladchuk declined comment when contacted by the AP because he had not yet spoken to Notre Dame officials.

In total, the ACC's new schedule will wipe 38 previously scheduled nonconference games off the books. Many of those games would have involved Group of Five conference and FCS schools that receive big payouts from Power Five schools for playing on the road with no return date.

Middle Tennessee from Conference USA was scheduled to play at Duke and at Virginia Tech in September. MTSU athletic director Chris Massaro said in a statement he hoped to have clarity about those games soon.

“Unfortunately, this is not very surprising but is disappointing as our players and fans look forward to games like these,” he said.

Additionally, any nonconference opponent must meet medical protocol requirements set forth by the ACC.

Those recommendations include regular testing for most athletes, from weekly tests in football within three days of a game to every-other-week tests in sports representing a “medium” risk such as baseball, softball and cross country.

The ACC also announced that fall team sports for non-revenue programs would begin Sept. 10 with a conference schedule that meets the NCAA’s minimum requirement for games: 10 for volleyball and six for field hockey, men’s soccer and women’s soccer. Additional games against conference or nonconference opponents would be left up to the schools, though they wouldn’t count in the ACC standings.

The plan says that teams in winter and spring sports may continue workouts, but the league is canceling any out-of-season fall competitions for golf, tennis, rowing, lacrosse, softball and baseball.