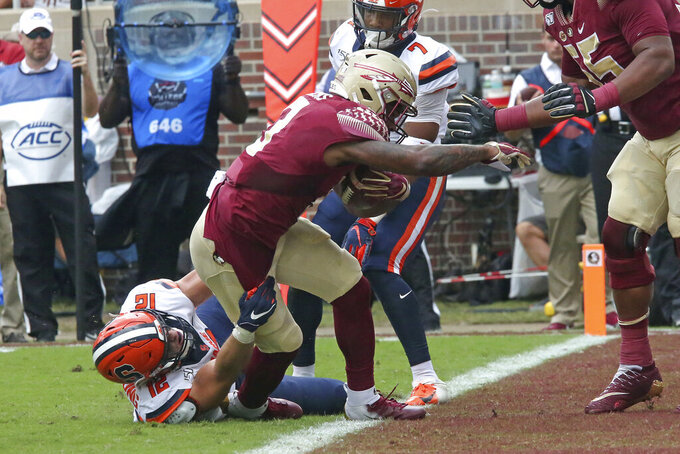 TALLAHASSEE, Fla. (AP) — Cam Akers has done a little of everything to help Florida State this season. On Saturday that included his most extensive playing time of his college career as a wildcat quarterback.

Akers ran for 144 yards and tied a school record with four touchdown runs as Florida State routed Syracuse 35-17 on homecoming.

The junior tailback had his fifth 100-yard rushing game of the season and now has 12 rushing touchdowns in 2019. Akers also took some snaps out of the wildcat formation and completed two passes for 26 yards.

"Akers is the type of back that can break two or three tackles every time he touches the football," Syracuse coach Dino Babers said. "When you get into a wildcat formation, basically you have 10 blockers. When you have a first-round draft pick and you have 10 guys blocking, that is a really, really good formation.

I would be very surprised if they don't continue to use that the rest of the year."

Florida State (4-4, 3-3 Atlantic Coast Conference) showed very little wildcat formations with Akers in its previous seven games. But it was a focus for the Seminoles in the week leading up to Saturday's game and Akers, a five-star prospect who was a wildcat quarterback in high school, was excited to show his versatility.

"We practiced it, repped it," Akers said. "We felt confident in it, doing it in this game."

Akers' 26 total points, which included a 2-point conversion run, was the second-highest in school history to Ron Sellers' 30 points vs. Wake Forest in 1968.

Florida State needed it. The Seminoles were desperate for a win after back-to-back losses to Clemson and Wake Forest, and coach Willie Taggart is firmly on the hot seat in year two at Florida State. He can alleviate some pressure with a win over rival Miami next week, which would also put the Seminoles a step closer to being bowl-eligible after missing out on the postseason in 2018.

"Very proud of our football team," Taggart said. "I thought our guys had unbelievable focus — a lot of distraction and they stayed locked in. We got to build off of it. And we have a 24-hour rule, so we're going to enjoy this and then it's immediately on to Miami."

Wisconsin graduate transfer Alex Hornibrook made his second start for FSU. Hornibrook completed 15 of 26 passes for 196 yards for the Seminoles, who led 35-3 going into the third quarter.

He had an up-and-down day but had shown Taggart what he was looking for in practices this week. Hornibrook said Taggart told him he would start over James Blackman "later in the week."

"We do something where we split some reps, and everybody plays so we can see who will be picked for the week," Hornibrook said. "Usually they tell you that you're going to start, and you just go out there and play. That's all you can do."

Tommy DeVito completed 20 of 33 passes for 151 yards for Syracuse (3-5, 0-4). Abdul Adams and Moe Neal had touchdown runs in the fourth quarter for the Orange.

Syracuse made one field goal in the first half but missed another, punted five times and saw the half end on a drive in Florida State's territory.

The Orange came into the game as the nation's leader in sacks allowed with 35 and struggled to keep DeVito off the ground. Marvin Wilson had two of Florida State's season-high seven sacks.

Syracuse: The Orange will go a month without a win, which last came on Sept. 28 against Holy Cross. Syracuse has yet to secure a win over a Power 5 team.

Florida State: The Seminoles won on homecoming for an eighth straight time and have improved to 4-1 at Doak Campbell Stadium this season.