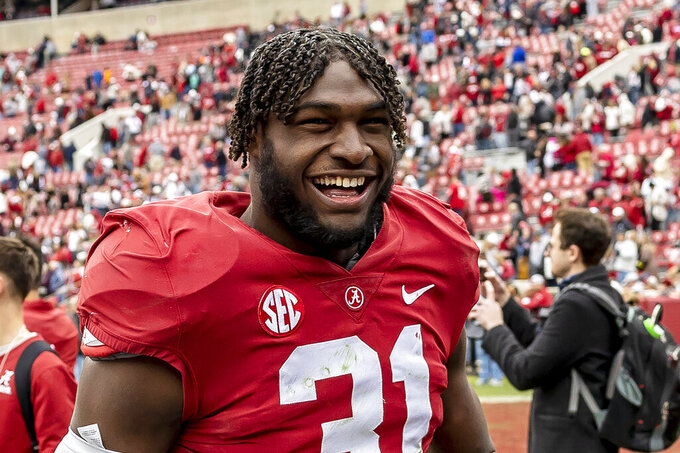 FILE - Alabama linebacker Will Anderson Jr. (31) jogs off the field after a 34-0 win over Austin Peay at an NCAA college football game, Saturday, Nov. 19, 2022, in Tuscaloosa, Ala. Anderson was named the Defensive player of the year on the All-SEC team announced Monday, Dec. 5, 2022.(AP Photo/Vasha Hunt, File)

CHARLOTTE, N.C. (AP) — Alabama outside linebacker Will Anderson Jr. has become the second two-time winner of the Bronko Nagurski Award given to the nation’s top collegiate defensive player.

Anderson was presented the award on Monday night by the Charlotte Touchdown Club.

Anderson, a junior, had two sacks in Alabama’s regular-season win finale against rival Auburn and had his first touchdown when he returned an interception 25 yards against Louisiana-Monroe.

Anderson joins former Northwestern linebacker Pat Fitzgerald as the only two-time winner of the award. Fitzgerald won the award in 1995 and 1996 and later went on to become the head coach at Northwestern.

It's unclear if Anderson will enter the NFL draft or return to Alabama next season.