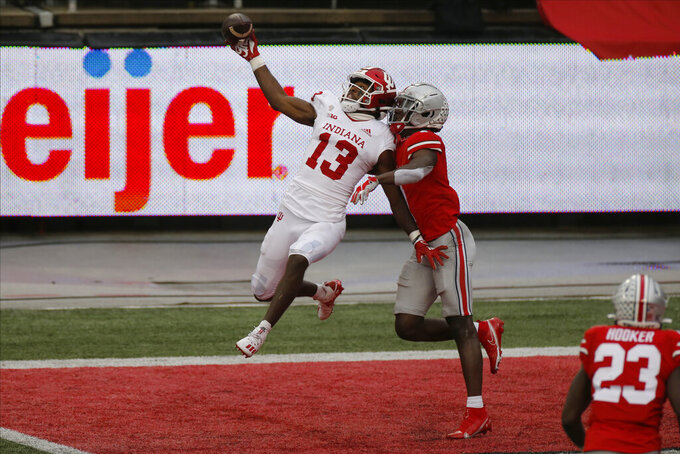 Most of the college football world was impressed by No. 12 Indiana's performance last week.

He saw too many turnovers, too many missed tackles and just too many mistakes in the loss at Ohio State. He expects his team to be sharper and cleaner this weekend against Maryland.

Allen knows that raising the bar has played a key role in Indiana's turnaround and he's not going to change course. Even against an opponent that took the last two weeks off because of a COVID-19 outbreak.

While outsiders saw the Hoosiers tally five sacks and force three turnovers against the Buckeyes, Allen said Indiana (4-1, No. 12 CFP) should have finished with eight more sacks. And while the offense dominated the second half, he knows there could have been more but for three turnovers including a pick-six.

Allen wasn't disappointed with the effort, he just expects more from his players especially with another significant challenge looming against Terrapins quarterback Taulia Tagovailoa.

“We definitely need to keep this guy contained," Indiana linebacker Micah McFadden said. “We did a fairly good job last week, but we didn’t get the quarterback on the ground enough, didn't get the sacks. We’ve got to get him (Tagovailoa) on the ground."

The Terrapins (2-1) have looked like a different team with their new quarterback.

They've outscored the last two opponents 35-7 in the first quarter, both wins, and the defense took the cue by posting seven sacks in a win at Penn State. It was Maryland's highest sacks total in a conference road game since November 2013 when the Terps were still in the ACC.

While Maryland coach Michael Locksley understands the quest for perfection, he has a somewhat different perspective of the Hoosiers than Allen after looking at video of Indiana while self-isolating.

“They fought and battled for four quarters and you'd expect that," he said. “Anybody knows Tom Allen knows that's the way his teams play."

Maryland's unexpected two-week layoff did more than merely rob the Terrapins of a shot at No. 3 Ohio State and a matchup with Michigan State. It also stunted the growth of the youngest team in the Big Ten, based on percentage of underclassmen.

“For a young team that doesn’t have a lot of experience, you want to play as much as you can to build your tool box,” Locksley said.

The Terps were on a roll before their season stalled, defeating Minnesota in overtime before rolling past Penn State.

“It’s up to us to build our own momentum,” Locksley said. “Each game has its own shelf life.”

“I know I've got great playmakers on the outside and if I put it out there one of them is going to go get it," Penix said.

Maryland running back Jake Funk is averaging 7.81 yards per carry, the second-highest average among all FBS running backs with more than 40 attempts. Funk is a fifth-year senior who tore the anterior cruciate ligament in his left knee two seasons in a row before coming back this season.

“It’s been a long two years, to say the least,” he said before the season.

Funk ran for 221 yards against Minnesota and backed that up with an 80-yard performance against Penn State, including a 38-yard touchdown run.