Analysis: Georgia can lean on defense -- history -- vs Tide 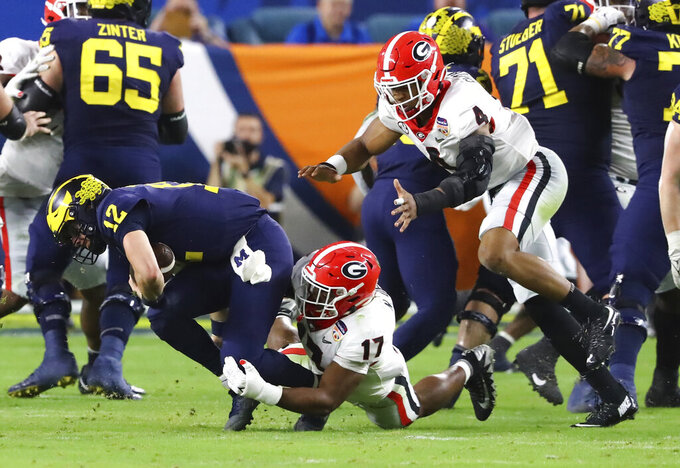 Dooley believes a rematch will work in Georgia's advantage against Alabama in the College Football Playoff title game on Monday night in Indianapolis. Dooley also has faith Georgia's defense will fare better in its second chance against Alabama quarterback Bryce Young.

“In most cases, not all, it’s tough to beat good teams again for the second time,” Dooley told The Associated Press earlier this week. “I’m hopeful that’s what is going to happen.”

The psychological edge that comes with the rematch favors Georgia. The extra motivation helps, but the best reason to pick the Bulldogs is the defense which carried the team all season.

Dooley, 89, plans to attend the game after recently testing positive for COVID-19 but recovering from symptoms he said were “kind of like a cold. I’m OK and ready to go.”

Dooley won 201 games Georgia's coach for 25 years, from 1964 to 1988. With Dooley as coach, Georgia won its last national championship in 1980, beating Notre Dame in the Sugar Bowl.

This season's Bulldogs completed their first undefeated regular season since the 1982 team and were ranked No. 1 before before losing to Alabama 41-24 in the SEC championship game on Dec. 4. Georgia responded to the loss with an impressive 34-11 win over Michigan in the CFP semifinal Orange Bowl on Dec. 31.

The rout of Michigan stands as the Bulldogs’ response to those who suspect they were exposed as overrated in their SEC championship game loss to Alabama.

The Bulldogs proved they indeed have a dominant defense, as they showed in the regular season. And history also is on their side.

“There’s a history there,” Dooley said. “Otherwise, why would Georgia be a 3-point favorite in this ballgame?”

Georgia leaned on its defense all season. The defense faltered only once, in the SEC title game against Alabama, when it failed to contain Young.

“I think we’ll do a better job defending him the second time around,” Dooley said.

The Bulldogs must find a way to put pressure on Young after being held without a sack in the first meeting. The defense, led by linebacker Nakobe Dean, is loaded with big-play potential.

Georgia enjoyed the luxury of creating pressure all season from its deep defensive front, which includes Jordan Davis, Devonte Wyatt, Jalen Carter and Travon Walker. When the unit couldn't pressure Young in the first meeting, breakdowns in the secondary were exposed.

Smart said the inability to pressure Young in the SEC championship game “wasn't for a lack of trying.”

“And we brought a lot of different pressures,” Smart said Monday. “They did a good job picking those pressures up. And at the end of the day, there’s four or five guys that are one-on-one up there. Somebody’s got to win one-on-one.”