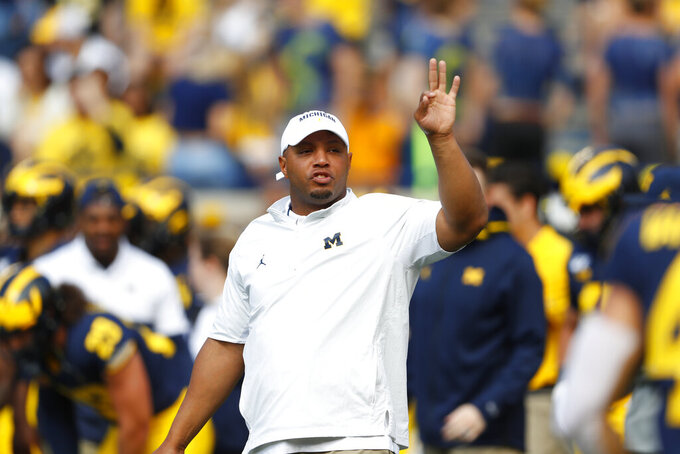 FILE - Michigan offensive coordinator Josh Gattis watches during warmups before an NCAA college football game in Ann Arbor, Mich., Saturday, Sept. 7, 2019. According to a person with knowledge of the deal who told The Associated Press on Sunday, Feb. 6, 2022, Miami is hiring Gattis to run new coach Mario Cristobal’s offense with the Hurricanes. (AP Photo/Paul Sancya, File)

A person with knowledge of the deal told The Associated Press on Sunday that Gattis was leaving Michigan after three seasons to join Cristobal’s staff. The person spoke on condition of anonymity because details of an agreement were still being finalized, and no announcement was imminent from either school.

Gattis won the Broyles Award as the nation’s top assistant coach this past season. He helped Michigan to a Big Ten championship and its first appearance in the College Football Playoff.

Michigan ranked 22nd in the nation in yards per play at 6.39 and averaged 214 yards rushing per game, 15th best in major college football and No. 1 in the Big Ten.

The news comes just days after Michigan coach Jim Harbaugh announced he was staying with his alma mater after interviewing with the Minnesota Vikings.

Gattis joined Harbaugh at Michigan in 2019 after stints as an assistant coach at Alabama and Penn State.